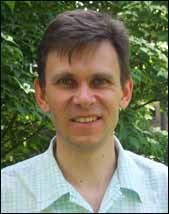 An international collaboration of researchers led by Morten Ring Eskildsen, an assistant professor of physics at the University of Notre Dame, has discovered an altogether new way in which superconducting electrons can interact with an applied magnetic field.

Superconductivity is a phenomenon which occurs in certain materials and which manifests itself by a complete loss of electrical resistance. An important area in the study of superconductors is how they respond to magnetic fields. Besides their obvious relevance to practical applications, such studies are an ideal way to obtain a deeper understanding of the fundamental aspects of superconductivity.

In experiments, Eskildsens team investigated the material CeCoIn5, which is a so-called heavy-fermion superconductor with a transition temperature of 2.3K (-456 degrees Fahrenheit). The results were obtained by neutron scattering experiments performed at the Swiss Spallation Neutron Source at the Paul Scheer Institute in Switzerland and were carried out in collaboration with researchers from the University of Montreal, ETH Zurich, the University of Birmingham, Los Alamos National Laboratory and Brookhaven National Laboratory.

When subjected to a magnetic field, most superconductors will generate vortices (electric tornadoes) which confine them in tubes of magnetic flux. Such vortices have been described by a model for which Alexei Abrikosov and Vitaly Ginsburg received a Nobel Prize in 2003. However, the results obtained by Eskildsen and his colleagues reveal a radical departure from the usual behavior.

Even in materials such as the high-temperature or heavy-fermion superconductors, where we do not presently understand the microscopic nature of the superconducting state, the Abrikosov-Ginzburg-Landau picture has, for more than 50 years, provided us with a phenomenological description of the vortices,Eskildsen said.But in CeCoIn5, as our measurements demonstrate, this paradigm breaks down, forcing us to rethink our understanding of superconductivity.

The discovery of superconductivity in certain ceramic materials at temperatures as high as 140K (-208 degrees Fahrenheit), well above the boiling point of liquid nitrogen, opened up new possibilities for applications. Superconductors are currently being used or developed for a wide range of applications including electric power transmission, ship propulsion motors, magnetically levitated trains, magnets for medical imaging, and digital filters for high-speed communications.

While the specific material reported by Eskilden and his colleagues is not directly relevant for technological applications due to its very low transition temperature, many of its properties are similar to those of the high temperature superconductors.
The Eskilden teams experiments are reported in todays (Jan. 11) edition of the journal Science.