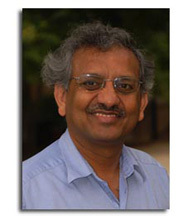 It is not often when a physicist has an important paper published in Physical Review Letters, considered the most influential journal in physics. So consider the feat achieved by University of Notre Dame nuclear physicist Umesh Garg, who had not one, but two, papers published, back to back, in PRL in October.

His first paper, publishedOct. 15, measures nuclear incompressibility – an important component of the Equation of State (EOS) of nuclear matter that relates to measurements of neutron stars, the most dense objects in the universe. His second paper, published Oct. 23, affirmed a property of the nucleus of an atom, called chirality (pronounced ki -rality) and put to rest recent conflicting data that had cast doubts on the nature of chirality in nuclei.

Both in chemistry and particle physics, space inversion changes left-handed into right-handed systems. For a long time physicists have considered atomic nuclei as achiral.

But the nucleus of an atom is not a simple, static object.

Gargs Notre Dame colleague Stefan Frauendorfshowed some time ago that certain nucleican be viewed more accurately as a clockwork of gyroscopes with all three axes being unequal. His new view of chirality of a nucleus is based on evidence that reversing time converts left-handed configuration of a nucleus into a right-handed one.

That view of chiralty had been called into question.

So Garg and his Notre Dame colleagues, including Somsundar Mukhopadhyay, a research visitor from India, went to the Gammasphere, Argonne National Laboratorys premier facility for research with gamma-rays, and made precise measurements of electromagnetic transition probabilities.

These measurements have affirmed the chiral character and put to rest the doubts expressed recently about the chiral nature of the observed bands in the nucleus of the element praseodymium (Pr) because the electromagnetic transitions did not conform to expectations from chiral bands,Garg said.

The paper also describes novel calculations, performed by Frauendorf and his colleague Daniel Almehed, that combine the tilted-axis cranking model (previously used to describe chiral behavior) with the well-established technique of random phase approximation (RPA), to establish that this nucleus exhibits a transition from chiral vibration to static chirality with increasing angular momentum.

This new kind of symmetry now has been reaffirmed,Garg said.

His other paper describes measurements of nuclear incompressibility carried out at the Research Center for Nuclear Physics at Osaka University in Japan using Grand Raiden, a sophisticated high-resolution magnetic spectrometer.

The way Garg, his student Tao Li, and other members of the collaboration went about measuring nuclear incompressibility was by examining the so-called giant monopole resonance, or thebreathing mode,of the nucleus.

This collective oscillation is similar to the way a drop of water sizzles and vibrates when it is dropped on a hot plate,Garg said.

Garg and his group report on measurements of the giant monopole resonance in a series of isotopes of the element tin (Sn) from which they have obtained, for the first time, anexperimentalvalue for the asymmetry-term of the nuclear incompressibility. This value, combined with their measurements of the incompressibility of nuclear matter, provides rather tight constraints on the interactions that nuclear astrophysicists use in calculations of the radii of neutron stars.