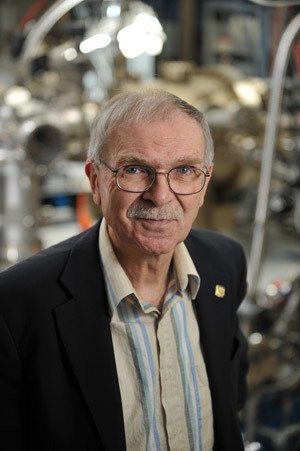 Jacek Furdyna, professor of physics at the University of Notre Dame, has been awarded the Nicolaus Copernicus Medal by the Polish Academy of Sciences in Warsaw, Poland. The medal is the Academy’s highest honor.

Furdyna, who holds the Aurora and Thomas Marquez Chair of Information Theory and Computer Technology in Notre Dame’s Department of Physics, was recognized for his world-renowned contribution to the design and development of new semiconductor materials, including magnetic semiconductors aimed at performing new and extremely fast functions in computers.

The new functionality of these semiconductor materials is based on the use of the electron spin, in addition to its charge, in the design of electronic circuits, which is expected to lay the groundwork for non-volatile magnetic memories for the next generation of computing systems. In addition to his work on magnetic semiconductors, Furdyna also has focused on two other semiconducting systems: quantum well structures for use in blue and blue-green light emitters, including semiconductor lasers, and semiconductor nanostructures, such as self-assembled quantum dots, quantum wires and their arrays. All of the structures are fabricated at Notre Dame by molecular beam epitaxy.

Born in Poland, Furdyna was deported to Siberia at age six by the Soviet government. After his release, he lived in the Middle East and England. Upon arriving in the United States, he attended Chicago’s Holy Trinity High School, operated by the Congregation of Holy Cross. Nearly all of his high school teachers were Notre Dame alumni, so his first academic contact after arriving in this country was with Notre Dame.

Furdyna joined the Notre Dame faculty in 1987. For his achievements in science, he was awarded honorary doctorates by Warsaw University in 2002 and by Purdue University in 2007. Furdyna is a fellow of the American Physical Society and of the Institute of Physics of the United Kingdom.

The Copernicus Award’s past recipients are renowned scientists and engineers in the fields of biology, chemistry, physics, mathematics, computer science, engineering, and other areas of science and technology including a number of Nobel Prize winners, whose work in the opinion of the Polish Academy of Sciences has had significant impact on science and technology in Poland.