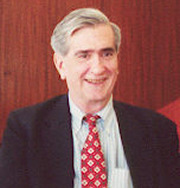 Philip Quinn, John A. O’Brien Professor of Philosophy at the University of Notre Dame, died this morning at Saint Josephs Medical Center after a long illness. He was 64.

A specialist in the philosophy of religion and the philosophy of science, Quinn was the author of more than 100 articles and reviews in various philosophical journals and anthologies. He also was the author of “Divine Commands and Moral Requirements” and “The Philosophical Challenges of Religious Diversity” and the co-editor of “A Companion to Philosophy of Religion.” He held several positions in the American Philosophical Association including the presidency of its Central Division and chair of the National Board of Officers. He was elected to the American Academy of Arts and Sciences in 2003.

A funeral Mass will be celebrated at 9:30 a.m. Tuesday (Nov. 16) in the Basilica of the Sacred Heart at Notre Dame.