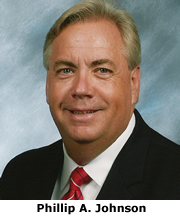 Phillip Johnson, director of Notre Dame Security Police (NDSP), has been elected president-elect of the International Association of Campus Law Enforcement Administrators (IACLEA). He will become president in June 2010.

Johnson joined NDSP as assistant director in 1986 and was named associate director in 2005 and director in 2007. During his 23-year tenure at the University, he has overseen police investigations, special events operations, technical services, crime prevention, administration and budgeting, traffic/parking, training, and student employment in the department. He previously served as director of security at Carleton College in Northfield, Minn., and director of campus safety at Aquinas College in Grand Rapids, Mich.

Johnson earned his bachelor’s degree in sociology and master’s degree in business administration from Notre Dame. He previously served as IACLEA’s director-at-large and has been affiliated with the organization since 1982. His civic activities include service on the board of the Family Justice Center of St. Joseph County, as a past board president of WVPE Radio, and as a volunteer for Christmas in April/Rebuilding Together.