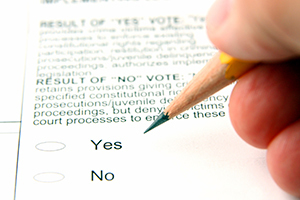 Ballot initiatives, those petition-driven public votes on contested issues, are often disparaged by liberals and conservatives alike for their avoidance of conventional representative democratic processes and their vulnerability to manipulation by well-financed and organized special interest groups.

Nevertheless, according to Benjamin Radcliff, professor of political science at the University of Notre Dame, people in states that rely more heavily on such initiatives are, on average, happier than people in other states. Perhaps more importantly, Radcliff argues that this “happiness benefit” of direct democracy applies most strongly to lower- and middle-income people, differing with numerous recent studies that conclude that the preferences of the working and middle classes are almost completely unrepresented in the ordinary policymaking process. Direct democracy, it would seem, promotes the general interest better than representative institutions.

Radcliff and co-author Gregory Shufeldt of the University of Arkansas at Little Rock report this and other findings in an article, “Direct Democracy and Subjective Well-Being: The Initiative and Life Satisfaction in the American States,” recently published in Social Indicators Research.

“Initiatives are very controversial,” Radcliff said, “the usual argument being that the wealthy and various business groups have lots of money and a big stake in these things, and as a result, just as in ordinary politics, the rich benefit while the rest suffer. We’re arguing that direct democracy is a good idea in itself, but doubly so when it provides a solution to the virtual non-representation of working- and middle-class families in the United States.”

Radcliff said that the best way to repair a “broken democracy” is to rely on direct democracy. “It makes everyone better off, and is especially helpful for the people who are disadvantaged by the regular electoral process.”

Radcliff teaches and studies issues at the intersection of American and comparative politics. His current research focuses on the social scientific study of happiness within the multidisciplinary field sometimes labeled “happiness economics.”