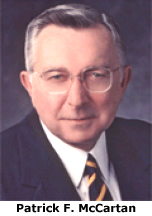 Patrick F. McCartan, chair of the University of Notre Dames Board of Trustees, has been awarded Notre Dames Laetare Medal for 2007. He will receive the medal, the oldest and most prestigious honor given to American Catholics, during the University’s 162nd Commencement exercises May 20 (Sunday).

Notre Dames auspicious institutional position as it enters a new era owes much to Pat McCartans strong and sure leadership, said Rev. John I. Jenkins, C.S.C., University president. We hope to convey with this, our highest honor, the gratitude Notre Dame owes him as well.

A member of the University's Board of Trustees since 1989, he was elected board chair and University fellow in 2000. His tenure as chair was highlighted by the election in 2004 and inauguration in 2005 of Father Jenkins as Notre Dames 17th president.

McCartan, who concentrates on appellate litigation and corporate governance matters, has been cited in surveys conducted by The National Law Journal as one of the country’s most respected and influential lawyers. In his 1994 book America’s Top Trial Lawyers: Who They Are & Why They Win, legal scholar Donald E. Vinson listed McCartan among those consummate courtroom advocates whose reputations are associated with major cases that have had a significant impact on society as a whole. Also featured in The Wall Street Journal, The American Lawyer, and The Best Lawyers in America, he is one of the few attorneys to have enjoined one president of the United States and defended another, having had Jimmy Carter’s gasoline tax declared unconstitutional and having successfully defended Ronald Reagan’s right to $29 million in federal election funds.

One of the largest law firms in the world, Jones Day has more than 2,200 lawyers and represents approximately 200 of the 500 largest corporations based in the United States and more than 200 companies based in Asia, Europe and Latin America.

McCartan is a fellow of the American College of Trial Lawyers and the International Academy of Trial Lawyers, as well as an honorary overseas member of the English Commercial Bar. Among other honors he has received are the Archdiocese of Cleveland's 1994 Archbishop Edward F. Hoban Award and the Anti-Defamation Leagues 1998 Torch of Liberty Award. He also received an honorary degree from Notre Dame in 1999.

The Laetare (pronounced Lay-tah-ray) Medal is so named because its recipient is announced each year in celebration of Laetare Sunday, the fourth Sunday in Lent on the Church calendar. Laetare, the Latin word for rejoice, is the first word in the entrance antiphon of the Mass that Sunday, which ritually anticipates the celebration of Easter. The medal bears the Latin inscription, Magna est veritas et prevalebit (Truth is mighty, and it shall prevail.)

Established at Notre Dame in 1883, the Laetare Medal was conceived as an American counterpart of the Golden Rose, a papal honor which antedates the 11th century. The medal has been awarded annually at Notre Dame to a Catholic whose genius has ennobled the arts and sciences, illustrated the ideals of the Church and enriched the heritage of humanity.