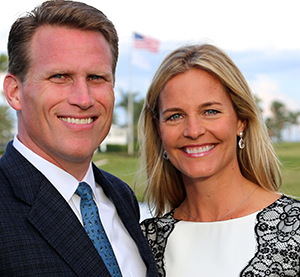 A member of the University of Notre Dame 1988 national championship football team and his wife have made a $3 million gift to endow the football team’s defensive backs coaching position. It is the first endowed assistant coach position at the University.

Pat and Jana Eilers of Winnetka, Illinois, made the gift to his alma mater, joining previous gifts to endow an engineering fellowship in the ND Energy Center, the Cavanaugh Council and the Joyce Football Grant-in-Aid Program. This latest gift will underwrite the salary of the defensive backs assistant coach, provide stability and resources for the long term and create funds for use within the department and across campus.

“Pat epitomizes everything that Notre Dame Athletics stands for. A star in the classroom and on the field while at Notre Dame, Pat translated the lessons learned here into success as a professional football player, businessman, family man and community leader,” said Jack Swarbrick, University vice president and the director of athletics. “This extraordinary gift is just one of many ways in which Pat and Jana continue to give back to Notre Dame. I have not met anyone who believes more strongly in value of intercollegiate athletics and the role it can play in educating young people; we are very fortunate to count Pat and Jana among the members of the Notre Dame Family.”

A two-year starter for the Fighting Irish, Eilers played three different positions (flanker, split end and defensive back), appearing in 34 career games and starting 18 times. As a flanker and split end, he totaled 11 receptions for 123 yards, added 10 rushing carries for 38 yards and one touchdown and returned four punts for 23 yards. As a defensive back and on special teams in 1987, he made 21 tackles, one for loss, one sack and one pass breakup. He also lettered in baseball batting .307 while at Notre Dame.

“Pat is a remarkable person, an extremely dedicated alum and, most importantly, a great husband to Jana, and father to Elizabeth, Katherine, Clare and Patrick," said the Richard A. Corbett Head Football Coach Brian Kelly. "This gift is yet another example that demonstrates his commitment to our University and our football program. Pat is a perfect representation to all current and future Notre Dame football student-athletes. He truly embodies what it means to be a ‘Notre Dame man.’”

Last year, Eilers took a sabbatical from his work as managing director of Madison Dearborn Partners (MDP), a Chicago-based private equity firm, to serve as defensive quality control assistant for the Fighting Irish in order to support Kelly’s staff while defensive graduate assistant coach Kyle McCarthy was on a medical leave.

“I’m honored that my friend, and former teammate, Pat Eilers was willing to make such an incredibly generous gift,” said Todd Lyght, Notre Dame defensive backs coach. “Pat’s love, dedication and commitment to Notre Dame and our football program are exemplary. It’s extremely humbling that my position will now bear his family’s name.”

Prior to joining MDP in 1999, Eilers served as a director with Jordan Industries Inc., a private holding company. He also worked as an associate with venture capital firm Investment Advisors Venture Capital Inc.

At Notre Dame, Pat Eilers earned degrees in biology (1989) and mechanical engineering (1990), and received his master of business administration degree from Northwestern University’s J.L. Kellogg Graduate School of Management (1999). Jana Eilers graduated from University of St. Thomas with a degree in Marketing.

“This gift is simply an expression of our gratitude to those professors, coaches and administrators who have dedicated their lives to Notre Dame’s unique mission of striving for excellence in academics, athletics and spirituality, while upholding the highest standards of integrity and character,” Pat Eilers said. “It’s a privilege to give back and we’re excited the resources will be used to endorse my friend and former teammate Todd Lyght,”

After college, Eilers played in 61 games during a six-year NFL career from 1990 through 1995 with the Minnesota Vikings, Washington Redskins and Chicago Bears.

Pat is the chair of Notre Dame’s advisory council for the student-athlete and also a member of the Wall Street Leadership Committee. An avid photographer, Jana Eilers is an active community member who volunteers at her children’s schools.

The Eilers have four children, including Elizabeth who graduated from the University last year and Katherine, a Notre Dame junior women’s lacrosse player.