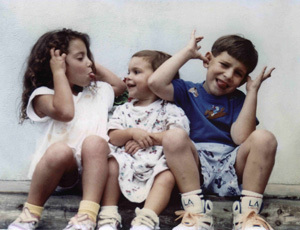 Building on a long-standing relationship with the University of Notre Dame, the Ara Parseghian Medical Research Foundation has strengthened its partnership with the University in order to support and advance research initiatives to find treatment options for Niemann-Pick Type C (NPC), a rare and deadly neurodegenerative disease that primarily strikes children before or during adolescence.

NPC is an inherited cholesterol metabolism disorder that strikes one in every 150,000 children. It has been referred to by the National Institutes of Health as “childhood Alzheimer’s” because of similarities in the brains of NPC and Alzheimer’s disease patients. NPC research has implications for Alzheimer’s, as well as a multitude of other conditions, including heart disease, stroke and Tay-Sachs disease.

The Parseghian Foundation is named in honor of Notre Dame’s former head football coach, who lost three grandchildren to NPC. The children’s parents, Mike and Cindy Parseghian, have dedicated their lives to the fight against the disease and now have taken steps to allow the University to play a more significant role in their endeavor.

“The Notre Dame family has been incredibly supportive through the years, in so many ways,” said Cindy Parseghian, who serves as president of the Parseghian Foundation. “During our most difficult times, we have felt so strongly the prayers and the warm presence of this community. This new venture will take our partnership with the University to another level, one that we hope will lead to meaningful advances in the treatment of Niemann-Pick Type C.”

Through a generous gift to Notre Dame, the Parseghian Foundation has established the Michael, Marcia and Christa Parseghian Endowment for Excellence to support NPC research and discovery and to build on the Foundation’s commitment to collaborate with young researchers at other institutions. Funds also will be dedicated in support of an annual NPC scientific conference that will be held at Notre Dame beginning in 2011, bringing together researchers from around the world to share discoveries and progress.

The partnership will strengthen ongoing NPC research efforts at Notre Dame, which include: the multidisciplinary, collaborative Drug Discovery Core, established by Notre Dame faculty, to which any member of the NPC research community may turn for the design and synthesis of potential drug candidates; an undergraduate course offered through the University’s Center for Rare and Neglected Diseases in which students are trained in the collection and assessment of data from NPC patients, with the data then used to enhance treatment protocols; and a collaborative agreement between the University and Eli Lilly & Co. in the area of compound library screenings that aims to identify new hits for development as therapeutic agents.

“Our researchers are committed to fighting a multitude of diseases, including those that do not typically receive significant attention from the medical and pharmaceutical communities,” said Gregory P. Crawford, William K. Warren Foundation Dean of the College of Science. “As a Catholic research university, it is entirely within Notre Dame’s mission to take a lead role in the fight against the conditions that cause human suffering and to work toward therapies, treatments and cures. Niemann-Pick Type C is just one example of the need for research that bridges the gap between these diseases and the discoveries that will bring relief to the people who suffer from them.”

“By solidifying their partnership, the Parseghian Foundation and Notre Dame are creating a formidable weapon in the fight against Niemann-Pick Type C,” said Norbert L. Wiech, a 1960 and 1963 Notre Dame alumnus whose biotech company Chromatin Therapeutics has partnered with the University to conduct research on inherited genetic disorders. “By harnessing the energy and resources of the two entities, they are poised to make the breakthroughs that are necessary in order to make progress toward managing this devastating illness and others for which cures and treatments remain elusive.”

Cindy and Mike Parseghian are 1977 Notre Dame graduates. Cindy Parseghian was honored by the University in 2009 with an honorary doctoral degree for her dedication to advancing NPC research.

“Given our family’s history with Notre Dame, and the breadth and depth of the University’s research expertise in this area, we believe Notre Dame is uniquely positioned to take on this challenge,” Cindy Parseghian said. “Our great hope is that, in strengthening our partnership, Notre Dame will be even better able to lead the fight against Niemann-Pick Type C—and to continue Michael, Marcia and Christa’s legacy of hope.”

Founded in 1994 by Parseghian family members shortly after three of the Parseghians’ four children were diagnosed with NPC, the Parseghian Foundation is a grass roots, non-profit organization dedicated to funding medical research projects to find a treatment for NPC and related neurodegenerative disorders.

More information about the Parseghian Foundation is available online at http://parseghian.org.