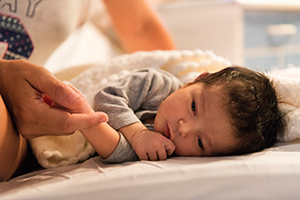 Did you receive affection, play freely and feel supported in childhood? Childhood experiences like these appear to have a lot to do with well-being and moral capacities in adulthood.

In a forthcoming article in the journal Applied Developmental Science, University of Notre Dame professor of psychology Darcia Narvaez and colleagues Lijuan Wang and Ying Cheng, associate professors of psychology, show that childhood experiences that match with evolved needs lead to better outcomes in adulthood.

According to Narvaez, one of the reasons that the well-being of children in the United States lags behind that of children in other advanced nations is because “we have forgotten that we are social mammals with specific evolved needs from birth.”

“Humans evolved with a nest of care for their young that matches up with the maturational schedule of the child. It was shaped over 30 million years ago and modified through human evolution,” Narvaez said. “We call it the evolved developmental niche.” In describing this niche, Narvaez emphasizes six components: Soothing, naturalistic perinatal experiences; responsiveness to a baby’s needs including sensitivity to the signals of the baby before the baby cries; constant physical presence with plenty of affectionate touch; extensive breastfeeding; playful interactions with caregivers and friends; and a community of affectionate, mindful caregivers.

Narvaez, Wang and Cheng asked adults to reflect on their childhoods according to several components of the evolved developmental niche (EDN): How much did they receive physical affection? Play freely outside and inside? Do things as a family inside and outside the home? Feel supported?

Adults who report receiving more of such parenting practices in their childhoods display less depression and anxiety, greater ability to take the perspective of others and an orientation toward compassion. Adults who report less of these parenting practices in their childhood have poorer mental health, more distress in social situations and are less able to take another’s point of view.

“Our research shows that when we don’t provide children with what they evolved to need, they turn into adults with decreased social and moral capacities,” Narvaez said. “With toxic stress in childhood, the good stuff doesn’t get a chance to grow and you become stress reactive. It’s hard to be compassionate when you are focused on yourself. We can see adults all around us who were traumatized or undercared for at critical times.”

In prior research, Narvaez and her colleagues found that children who experienced more of the evolved developmental niche exhibit, for example, more empathy, self-control and conscience.

Narvaez, who joined Notre Dame’s faculty in 2000, conducts research on moral cognition, moral development, and moral character. She writes more about the needs of children and adult morality in the book, “Neurobiology and the Development of Human Morality: Evolution, Culture and Wisdom,” winner of the 2015 William James Book Award from the American Psychological Association.