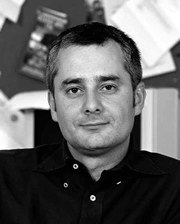 A new paper in todays edition of the scientific journalNatureby University of Notre Dame physicist Albert-László Barabási offers a fascinating glimpse into the communication patterns of scientific giants Albert Einstein and Charles Darwin.

Barabási is a pioneer in networking as a unified scientific theory and the author ofLinked: The New Science of Networks.His earlier research led to significant findings on how networks are structured and how they operate. Of late, he has begun examining how people behave in networks.

In a paper published last May in Nature, Barabási revealed the results of his studies of e-mail usage. He found that e-mail usage is not uniform, but, rather, is marked by bursts of activity. This occurrence of very long periods of inactivity separated by bursts of intense activity follows a scaling law termed aheavy tailed processby physicists.

In the eras of Darwin and Einstein, letters were the main communication and Barabási sought to determine if their patterns of communication follow a different scaling law than that associated with todays instant-access e-mail. He chose to study the correspondence of Darwin and Einstein because the Einstein Archives in Jerusalem and the Darwin Correspondence Project in Cambridge offer a detailed record of their respective correspondence, containing the sender, recipient and date of each letter.

When we looked at the communication patterns of scientists whose correspondence has been carefully catalogued, Darwin and Einstein stand out, given that the record of their correspondence is fairly complete,Barabási said.It consists of over 14,000 letters sent or received by Darwin, and over 30,000 by Einstein. These are incredible numbers: Einstein appears to have sent one letter per day on average and, on a few occasions, received as many as 120 letters on the same day. Most important, both made a point of answering most of the letters they received, even if they came from school-children.

Barabási measured the distribution of time it took Darwin or Einstein to respond to specific letters. He found that the majority of letters (53 percent in Einsteins case and 63 percent inDarwins) were responded to within 10 days. Yet, in some cases the correspondence was stalled for years.

We have to realize that, given the wide range of response times, both Darwin and Einstein must have prioritized correspondence in need of a response,Barabási said.Our results indicate that Darwins and Einsteins late responses are not singularities or exceptions. Although the means of communication have changed, the communication dynamics have not: Darwins and Einsteins patterns of correspondence and todays electronic exchanges follow the same scaling laws.

Barabási believes that it is likely that Darwin and Einsteins communication patterns are not different from that of their scientific peers, representing samples of professional interactions in an era when surface mail was the main link to the outside world.

The fact that they did answer most letters in a timely fashion indicates that, while they had many other responsibilities, they were acutely aware of the importance of intellectual discourse,he said.

Barabási also feels that the study is of historical interest.

I think this paper is fascinating because it offers a glimpse into the communication patterns of the two scientific giants that probably had the biggest role in shaping todays science, particularly given the fact that we are celebrating the 100 th anniversary of Einsteins Miraculous Year this year,he said.Our results also indicate a pattern that neither the famous, not the undistinguished, can escape.