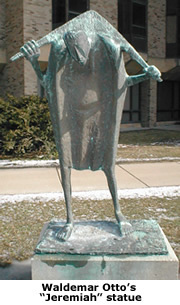 The religious statuary of Notre Dames campus, no less than its landscape and architecture, is variegated, eccentric and provocative.The quarrels to which it often gives rise oddly distinguish taste from theology, so that what one sidewalk critic will denounce as crudely vulgar, another will defend as sincerely devotional.In only a very few of the campus statuesIvan MestrovicsJesus and the Woman at the Well,Joseph TurkaljsMosesand Rev. Anthony Lauck, C.S.C.sVisitationall come to mindare the impulses of craft and belief sufficiently honored to mollify both sorts of criticism.

One such work, Waldemar OttosJeremiah,is rarely commented upon, perhaps because of its peripheral location on the walkway between Grace and Flanner Halls, or perhaps because of its restive subject, that loud Old Testament prophet whose ministry was summarized by Cardinal John Henry Newman in the wordsgood hope, labor, and disappointment.Lent seems a particularly good season to consider it.

Waldemar Otto came to Notre Dame in the fall of 1963 as artist-in-residence, succeeding Mestrovic, the prolific Croatian sculptor who had died the year before.He came at the invitation of Father Lauck, who admired what he calledthe growing familyof Ottos religious artworks in theBerlinarea.These includedKing David with the Harpin the Evangelical Student House, a continuous bronze relief of Biblical scenes on one wall of the Heilandskirche, and a large crucifix for the Phillipus church.When Father Lauck asked the newcomer what drew him to such subjects, Otto replied simply,It is natural to me.I cannot escape it.

Jeremiah understood such compulsions better than most, so much so that even his most heartfelt prayer rings with a sort of crazed defiance that verges on blasphemy:

p. Lord, you have duped me, and I have been your dupe; you have outwitted me and have prevailed: I have been made a laughing-stock all the day long, everyone mocks me.

Whenever I speak I cant help but cry out and proclaim violence and destruction. I am reproached and mocked all the time for uttering the word of the Lord.

Whenever I said, I will call him to mind no more, nor speak in his name again,then his word was imprisoned in my body, like a fire blazing in my heart, and I was weary with holding it under, and I could endure no more. (Jer 20:7-9)

Ottos Jeremiah conspicuously attests to such anguish.The prophet appears as a pathetic, bedraggled figure, rendered in contemporary expressionistic contours that call to mind Rowan Gillespies searingFaminestatues along theLiffeyRiveronDublins Custom House Quay.Every bit as striking as the figure is its barely endurable burden, the iron yoke God commanded Jeremiah to carry in the streets of Jerusalem as a cruel device of guerrilla theater, a bleak and unwelcome reminder that its inhabitants must submit to the conquest of Babylon to atone for their infidelity.As is usual with prophesy, respectable public opinion scorned Jeremiahs call to repentance, and it is not at all difficult these days to imagine the mainstream response of ancient Jerusalem to speeches which could only embolden the nations mortal enemies.

He was born around 645 B.C., a time and world as turbulent, unpredictable and frightening as our own.Although he likely knew nothing of them, Lao-tze, Siddhartha, and Pythagoras were among his contemporaries, Apollo and Bacchus were worshipped by his distant neighbors, and the Mayans were building temples in another part of the universe.And inJerusalem, the world was ending.Everything that made life worth living was being surrendered to the nations enemies, and God evidently approved of this catastrophe.

As his most beleaguered messenger, Jeremiah surely believed that God wouldmustultimately rescue the children ofIsrael.As a zealous and fastidiously obedient believer, he had reason to hope for some measure of protection and support.Called to his ministry early, he was a public figure, and not a very well-liked one, by his early20s, never married, spent more than 10 years in prisons, had far more enemies than friends, and died in exile inEgypt, probably stoned to death by furious former allies.Newmansgood hope, labor, and disappointmentsomewhat understate matters.

Nevertheless, Ottos choice of this most miserable of our ancestors for a public sculpture seems apposite on a campus in which each classroom is adorned with the depiction of a tortured man in the throes of death.Far more than misery is visible in this contorted figure, its neck excruciatingly bent and its head thrust desperately forward.

Jeremiahs hopeless posture prefigures and makes plausible that suffering and astonished face whose penetrating gaze sees through shattered hope, through the humiliation of defeat and exile, through the heartbreak of infidelity and desertion, through death itself to the frontier of his and our homeland.