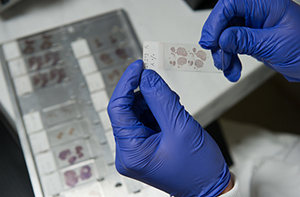 Ovarian cancer is a deadly disease, one that’s hard to detect until it has progressed significantly. More than 75 percent of women diagnosed with ovarian cancer have metastasis at the time of diagnosis, resulting in a low five-year survival rate of less than 30 percent.

A large number of studies have shown that an increased body mass index (BMI) is associated with a greater risk for ovarian cancer with worse overall survival. More than 35 percent of women in the United States are obese, putting them at increased risk for the cancer.

However, the influence of obesity on ovarian cancer metastasis had not been evaluated. Researchers from the University of Notre Dame and its affiliated Harper Cancer Research Institute (HCRI) unveil important new insights into the relationship between ovarian cancer and obesity.

M. Sharon Stack, Ann F. Dunne and Elizabeth Riley Director of the HCRI and professor of chemistry and biochemistry, notes that ovarian cancer is the leading cause of death from gynecologic malignancy in the U.S. The researchers set out to determine whether obesity contributes to ovarian cancer metastatic success. In other words, are tumor cells better able to successfully metastasize when the “host” is obese versus lean?

“In 3-D tissue culture models, we found that lipid-loading the mesothelial cells, or growing them in the presence of components that make up fat, increased the ability of tumor cells to bind to them,” Stack said. “As tumor cell-mesothelial cell binding is a key step in ovarian cancer metastasis, this prompted us to study this further in mouse models. We used a ‘diet-induced obesity’ (DIO) protocol in which mice were fed a high fat diet, which was 40 percent fat, relative to mice fed control chow. When mice were significantly different in weight, they were injected with fluorescent ovarian cancer cells, and we monitored metastatic seeding in the abdominal cavity by in vivo imaging.”

Individual organs were removed from the mice and imaged to quantify tumor burden in each organ. Researchers also used another mouse model of obesity, termed the ob/ob mouse, which harbored a mutation that caused it to become highly obese.

“In all of these models, we found that obesity enhances ovarian cancer metastatic success,” Stack said.

The researchers hope that further research in this direction may provide new targets for dietary and therapeutic interventions to slow or inhibit metastatic dissemination and thereby impact the long-term survival of women with ovarian cancer. However, Stack pointed out that they are just at the beginning of understanding this complex disease.

“The peritoneal cavity is a complicated microenvironment, containing tumor cells, immune cells, fluid and many host organs,” she said. “Our ongoing efforts are aimed at understanding the mechanism by which obesity impacts metastatic success. For example, we have found that tumors growing in obese host mice turn on lipid synthesis and lipid transport, suggesting that they are better able to acquire and utilize nutrients from fat. The blood supply to the tumors is also impacted, as is the presence of specific immune cells. There is still a lot of work needed to figure out where we can intervene in this process.”

“In addition to the cell-based research, we analyzed hundreds of fluorescent images and many hundreds of slides to collect the data to support our conclusions,” she said. “We had phenomenal interactions with the Harper Tissue Biorepository and the Notre Dame Integrated Imaging Facility. You can see the team effort by looking at the author listing: This paper has 22 authors. Seven of them are current or former Notre Dame undergrads, and four are current or former ND grad students.”