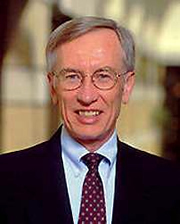 In advance of United Nations Day on Oct. 24 (Monday), a University of Notre Dame political scientist says theUnited Statesshould focus on improving the UN, not undermining it, because the organization does things for Americans that they cant do, or cant do as well.

Robert Johansen is a senior fellow at Notre Dames Joan B. Kroc Institute of International Peace Studies. He has spent decades studying global governance, and is convinced that the UN is the most effective way to resolve some of theUnited Statesmost pressing problems.

Like all political institutions, the UN needs to be watched carefully to prevent corruption and to make it more effective,Johansen said.Yet, despite its flaws, the UN enables us to do much more than we could do without it.

First, the UN gets other countries to share the burdens of fighting disease, building schools, and enforcing international laws against terrorism, war, and gross violations of human rights,Johansen said.Burden sharing expands by 20 fold what theUnited Statescould do alone.

UN peacekeeping is highly cost effective, he noted.The cost of just 10 days of theU.S.military campaign inIraqwould have paid for all UN peace operations for an entire year. And more than two-thirds of UN peacekeeping costs are paid by other countries.

Second, the UN establishes legitimacy for policies that protectU.S.security,Johansen said. Many policies would be doomed to failure in theMiddle East,Africa, andAsiaif they were seen as an effort by theUnited Statesto impose its will, rather than as the product of a UN process.

Third, Johansen said,some global law-making is necessary for a peaceful world.Security Council decisions to enforce peace are legally binding on every country in the world, while actions demanded by theUnited Statesalone are binding on no one.

To stop the spread of nuclear weapons will require establishing worldwide limits on those weapons and worldwide inspection to ensure that obligations are kept,Johansen said.This would need to be done by the International Atomic Energy Agency, which is part of the UN system.

* Contact: * _Professor Robert Johansen is available for further comment at 574-631-6871 or johansen.2@nd.edu _ . The preceding comments are for use in whole or part.