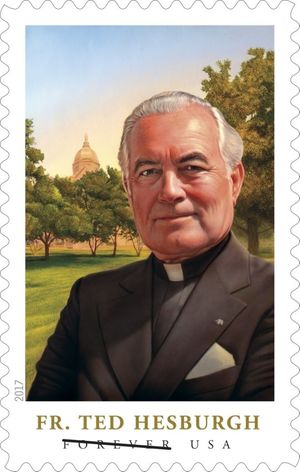 Responding to the United States Postal Service’s announcement Tuesday (Sept. 20) that it will issue a stamp next year honoring the late Rev. Theodore M. Hesburgh, C.S.C., University of Notre Dame President Rev. John I. Jenkins, C.S.C., said: “It’s fitting that the United States recognizes Father Hesburgh’s contributions to our nation and the world in a medium that will literally transport his legacy to households across America and around the world.”

The 47-cent forever stamp will be issued next fall with an unveiling ceremony at the University to include the first-day-of-issue of the stamp at Notre Dame’s post office. Additional information will be provided in coming months.

In addition to his 35-year tenure as Notre Dame’s president (1952-1987), Father Hesburgh’s other notable achievements and accolades included:

Following his ordination, Father Hesburgh continued his study of sacred theology at the Catholic University of America in Washington, D.C., earning his doctorate in 1945. He joined the Notre Dame faculty the same year and served as chaplain to World War II veterans on campus in addition to his teaching duties in the Religion Department. He was appointed the head of that department in 1948, and the following year was appointed executive vice president in the administration of Rev. John J. Cavanaugh, C.S.C., and University president. At the age of 35 in June 1952, he was named the 15th president of Notre Dame.

Notre Dame has been recognized by the U.S. Postal Service on three previous occasions — in 1988 with a stamp honoring legendary football coach Knute Rockne, in 1998 with a stamp of the famous football backfield known as the Four Horsemen and in 1992 with a post card celebrating the sesquicentennial of the University.