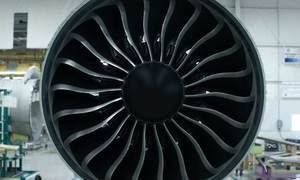 The University of Notre Dame and five public and private partners announced today Thursday (June 26) a $36 million project that will be the nation’s foremost research and test facility for advancing the technology used in the massive gas turbine engines used by commercial and military aircraft, power plants, and the oil and gas industry.

Construction in South Bend’s Ignition Park on a 43,000-square-foot building — of which 25,000 square feet will be for the Notre Dame Turbomachinery Facility — will begin this summer and be completed by March. The facility will be fully operational in July 2016.

“This venture will be a cutting-edge research and testing facility for the turbine engine industry as well as a tremendous economic driver for our region,” said Rev. John I. Jenkins, C.S.C., the University’s president. “Notre Dame is grateful to our partners for their support of this project and excited about all that it will mean to our University, the city and state, the industry as a whole and our nation.”

Notre Dame will contribute $7.5 million to the project. Other partners are the General Electric Co., which has committed $13.5 million to fund research and testing for five years; the city of South Bend, which is contributing $4.4 million inclusive of equipment, land for a new power substation and tax abatements; the state of Indiana, through the Indiana Economic Development Corp., which is providing up to $600,000 in training grants and up to $2 million in infrastructure assistance; Great Lakes Capital, which is providing upfront capital of approximately $6 million to construct the facility; and Indiana Michigan Power, which will be investing $2 million in a new substation to provide the considerable power needed to operate the facility’s multiple test cells.

“The center will allow GE’s industrial businesses to simulate full-scale engine operating environments,” said Rick Stanley, vice president and chief technologist for GE’s Power and Water business and a Notre Dame graduate. “The important rig testing we will do at the center builds upon GE’s already strong and long-standing technical relationship with the University. For years, GE has turned to Notre Dame for top technical talent.”

When fully operational, the Notre Dame Turbomachinery Facility will provide about 60 new jobs to directly operate the center, with an average salary and benefits package of about $79,000. An additional 60 jobs are expected through the growth of local suppliers to support the facility’s need for precision manufactured components. At full operation, research expenditures generated through work conducted at the facility are expected to exceed $15 million annually.

“The aerospace industry is reaching new heights in Indiana,” said Gov. Mike Pence. “Universities like Notre Dame and others across the state are providing avenues for discovery, proving that the sky is the limit in Indiana when it comes to bringing a big vision to life. The next great technological innovation could come from the mind of a Hoosier, highlighting for the world the full range of possibilities when investing in a state that works.”

Mark Neal, deputy mayor of South Bend, added: “Attracting such major investment speaks to South Bend’s economic future and its capacity to attract high-tech businesses. This project continues our city’s history of innovation and is more evidence of the benefits that South Bend’s economic and geographic advantages offer.”

The new facility, which will feature five test bays for compressor and turbine rig testing, will take previous work to new heights by testing engine components at pressures and temperatures higher than any that exist at current U.S. university facilities. It also will be used to advance current working relationships with both government sponsors and all manufacturers of gas turbine engines.

“We are very excited to be launching the Notre Dame Turbomachinery Facility,” said Robert J. Bernhard, the University’s vice president for research. “It will be a significant combination of world class research, building on an outstanding program, and local economic development. We are very grateful to our collaborating organizations, who have been outstanding partners in putting this project together.”
In addition to the industry and government partnerships, Notre Dame plans to collaborate with researchers and staff at local and state colleges and universities in order to widen the educational mission of the new facility.

More information is available at http://www.nd.edu/turbomachinery/.