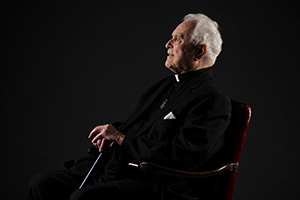 The University of Notre Dame will celebrate a special Mass on Thursday (May 25) to mark the 100th anniversary of the birth of the late Rev. Theodore M. Hesburgh, C.S.C., the University’s president from 1952 to 1987 and one of the most influential figures of the 20th century in higher education, the Catholic Church and national and international affairs.

Rev. John I. Jenkins, C.S.C., Notre Dame’s president, will preside at the Mass, which will begin at 5:15 p.m. in the Basilica of the Sacred Heart. Rev. Austin Collins, C.S.C., religious superior of Holy Cross Priests and Brothers at Notre Dame and professor of sculpture, will deliver the homily. All members of the campus and local communities are invited.

Following his ordination, Father Hesburgh continued his study of sacred theology at the Catholic University of America in Washington, D.C., earning his doctorate in 1945. He joined the Notre Dame faculty the same year and served as chaplain to World War II veterans on campus in addition to his teaching duties in the Religion Department. He became the head of that department in 1948, and the following year was appointed executive vice president in the administration of Rev. John J. Cavanaugh, C.S.C., the University president. At the age of 35 in June 1952, he was named the 15th president of Notre Dame.