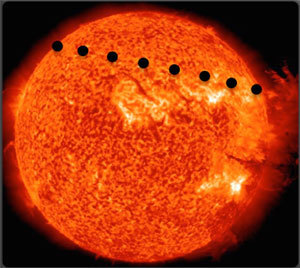 On June 5 (Tuesday), the Earth, Venus and the Sun will align for the last time in the lifetime of any human on the planet. This rare event called the Transit of Venus, when the planet Venus passes directly in front of the Sun, won’t be seen on Earth again until 2117.

The Transit of Venus is a rare astronomical event because Venus and Earth orbit the Sun on planes that align only twice in an eight-year period, and then the orbits do not realign for either 121.5 or 105.5 years.

When Venus transits the sun, what we see from Earth is a small black dot that passes along a path from left to right.

The University of Notre Dame is hosting a series of events to mark the Transit.

A special musical and visual event with Axiom Brass featuring Celestial Suite will take place May 31 (Thursday) at 7 and 8:30 p.m. in the Digital Visualization Theater of the Jordan Hall of Science. The event is free, but ticketed, and tickets are available in the LaFortune Student Center ticket office.

Display cases in the Hesburgh Library will feature historical artifacts from the 1874 and 1882 Transits of Venus as well as science and eye safety information, Notre Dame’s connection to the 1882 Transit and information on local events.

On June 5, Transit of Venus telescope viewing will take place next to the sun dial at Jordan Hall beginning at 5 p.m. The Transit begins at approximately 6:04 p.m. and will be visible until approximately 8:30 p.m. The first 500 people will get solar shades, and food vending from Notre Dame Food Service will be available. There also will be a live webcast in Jordan Hall from locations around the globe. Displays from “Visions of the Universe: Four Centuries of Discovery,” a traveling exhibit to mark the International Year of Astronomy (IYA) in 2009, will also be available.