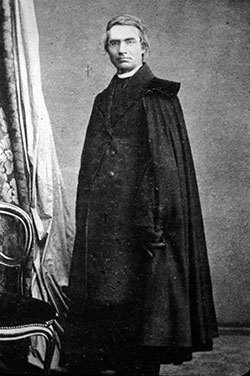 The University of Notre Dame will celebrate the 200th anniversary of the birth of its founder, Rev. Edward Sorin, C.S.C., on Feb. 6 (Thursday) with a Mass at 5:15 p.m. in the Basilica of the Sacred Heart.

Rev. Robert Loughery, C.S.C., rector of Sorin Hall, will preside at the Mass and give the homily.

The founder of Notre Dame was born Feb. 6, 1814, in Ahuillé, Mayenne, a small village in northwestern France. Ordained to the priesthood in 1838, he led a band of seven members of a newly formed religious order, the Congregation of Holy Cross, to what was then mission territory on the Indiana frontier three years later. On Nov. 26, 1842, when he arrived at what is now the campus of Notre Dame, Father Sorin was 28 years old.

The only shelter then standing on the 524-acre site was, Father Sorin wrote in his journal, “an old log cabin, 24 × 40 feet, the ground floor of which answered as a room for a priest, and the story above for a chapel for the Catholics of South Bend and the neighborhood, although it was open to all the winds.”

Undaunted by the cabin’s dilapidation, Father Sorin envisioned there what he soon began to build and to call “L’Université de Notre Dame du Lac” (the University of Our Lady of the Lake), insisting that the new school would become “one of the most powerful means for doing good in this country.”

The confidence of that pledge was tested on April 23, 1879, when a massive fire destroyed the Main Building and virtually the entire fledgling university. In what would become an iconic moment of Notre Dame’s history, Father Sorin addressed the stunned survivors of the catastrophe who had gathered a few days later in Sacred Heart Church. “I came here as a young man and dreamed of building a great university in honor of Our Lady,” he told them. “But I built it too small, and she had to burn it to the ground to make the point. So, tomorrow, as soon as the bricks cool, we will rebuild it, bigger and better than ever.” The University, rebuilt, bigger, and better, reopened four months later. 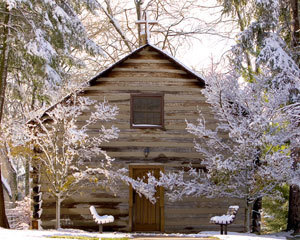 On the evening of Feb. 6, the Notre Dame dining halls will serve 19th-century French cuisine, including birthday cake, in honor of Father Sorin’s birthplace.

On Thursday (Jan. 30), in an audience with members of Notre Dame’s board of trustees, Pope Francis praised the University’s founder, saying that “the vision which guided Father Edward Sorin and the first religious of the Congregation of Holy Cross in establishing the University of Notre Dame du Lac remains, in the changed circumstances of the 21st century, central to the University’s distinctive identity and its service to the Church and American society.”