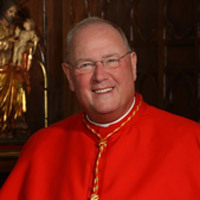 The ceremony will be held in the morning at Notre Dame Stadium in order to accommodate as many guests as possible. Undergraduate diploma ceremonies for each college and school will be held the afternoon of May 19, and the Law School, Graduate Business, and Graduate School ceremonies will take place May 18.

Cardinal Dolan, archbishop of New York and president of the U.S. Conference of Catholic Bishops, will receive an honorary doctor of laws degree. Other honorary degree recipients are:

Gu Binglin (doctor of science) – A leader in the field of condensed matter physics and computational materials science, Gu is the former president of Tshingua University in Beijing. A native of Harbin, China, he graduated from Tshingua’s Department of Engineering Physics in 1970 and received his doctoral degree at the University of Aarhus in Denmark in 1982. He has conducted research and taught physics at Tshingua since then, besides stints as a visiting scholar at Tohoku University in Japan and Notre Dame. Elected to the Chinese Academy of Sciences in 1999, he served as dean of the Graduate School and vice president at Tshingua before his tenure as president from 2003 to 2012.

Sister Antona Ebo, F.S.M. (doctor of laws) – A lifelong pioneer in civil rights, Sister Ebo has been a prominent activist for human rights since she marched with Rev. Martin Luther King Jr. in Selma, Ala. A native of Bloomington, Ill., she became one the first three African-American members of the Franciscan Sisters of Mary in 1946. As the only black nun in the crowd three days after Selma authorities attacked a peaceful protest march, she became a key speaker and enduring image in King’s 1965 march to Montgomery. Two years later, she became the first black woman religious to head a hospital when she was named administrator of St. Clare Hospital in Baraboo, Wis. She helped found and later served as president of the National Black Sisters’ Conference. Her trailblazing career in civil rights, hospital management and ministry has earned her a wide range of awards, honorary degrees and speaking opportunities.

Marilynne Robinson (doctor of letters) – An award-winning author of fiction and nonfiction, Robinson won the 2005 Pulitzer Prize for her novel “Gilead.” Born in Sandpoint, Idaho, she graduated from Brown University in 1966 and earned her doctoral degree from the University of Washington in 1977. In 1980, her first novel, “Housekeeping,” received the PEN/Hemingway Award for best first novel and was nominated for the Pulitzer Prize. Her most recent novel, “Home,” won the 2008 Los Angeles Times Book Prize. Like her novels, her nonfiction books, essays and articles have earned a reputation for rigorous reasoning and a salient moral vision, often drawing from biblical narrative. She has been writer-in-residence or visiting professor at many universities, currently teaching at the Iowa Writers’ Workshop and living in Iowa City.

Morton Schapiro (doctor of laws) – A leading authority on the economics of higher education and college finance and affordability, Schapiro is the 16th president of Northwestern University. He received his bachelor’s degree in economics from Hofstra University and his doctoral degree from the University of Pennsylvania. He started his career on the faculty at Williams College in Massachusetts in 1980, leaving in 1991 for the University of Southern California, where he taught and served in several administrative posts; he returned to Williams in 2000 to serve as president. He became Northwestern’s president in 2009. In 2010, Schapiro was elected as a fellow of the American Academy of Arts and Sciences, one of the nation’s oldest and most prestigious honorary societies. He has written prolifically and testified before Congress about education costs, student aid and related economic issues.

Kenneth Stinson (doctor of laws) – A Notre Dame alumnus, parent and member of the Board of Trustees, Stinson is the chairman emeritus of Peter Kiewit Sons’, Inc., one of the country’s largest construction firms. He earned his bachelor’s degree from Notre Dame and graduate degree from Stanford University, serving three tours in Vietnam with the U.S. Navy Civil Engineering Corps between degrees. He joined Kiewit in 1969 and worked for a decade as an engineer and manager on large projects across the country. Moving to Kiewit’s corporate headquarters in Omaha, Neb., he ascended the management ranks until he was named chairman and CEO of the construction group in 1992 and the parent company in 1998. He serves on the boards of ConAgra Foods Inc., Valmont Industries Inc. and McCarthy Group, LLC. Besides his many charitable interests in Omaha, Stinson was a member of Notre Dame’s advisory council for the College of Engineering from 1996 until his election to the Board of Trustees since 2006.