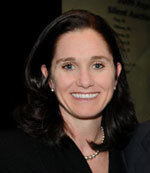 The ceremony will be held in the morning at Notre Dame Stadium in order to accommodate as many guests as possible. Undergraduate diploma ceremonies for each college and school will be held the afternoon of May 20, and the Graduate School ceremony will take place May 19 (Saturday).

DeMaria, an Irish swimmer who made an inspirational comeback from injuries sustained in a team bus accident, will receive an honorary doctor of laws degree. Other honorary degree recipients are:

Jude Banatte (doctor of science) — Head of programming for Catholic Relief Services (CRS) in Haiti for the last 12 years, Banatte gained international recognition for his courage and organization during the response to Haiti’s 2010 earthquake. A native of Les Cayes, Haiti, he received his medical degree in 1991 and immediately joined CRS. After the earthquake, he visited hospitals, assessed needs and helped search through the rubble for survivors and much-needed medical supplies. He also has led CRS efforts to provide temporary shelters for those the quake made homeless and traveled extensively to speak about the current progress and needs in Haiti.

Luis Caffarelli (doctor of science) — A leader in the field of partial differential equations and their applications, Caffarelli’s mathematical work is important for problems in physics, chemistry, biology and the social sciences. Born and educated in Buenos Aires, Argentina, he has taught at the universities of Minnesota, Chicago, Princeton, New York and Texas and is currently a professor of mathematics at the University of Texas at Austin. His problem-solving has contributed greatly to science in the areas of homogenization, nonlinear elliptic equations and free boundary problems. The American Mathematical Society awarded him the Leroy P. Steele Prize for Lifetime Achievement in 2009.

Dick Ebersol (doctor of laws) — A longtime NBC producer, Ebersol’s television career ranges from “Saturday Night Live” to the Olympics, including eight of the top 10 most-watched television events in U.S. history. He is also the executive responsible for acquiring the rights to televise Notre Dame home football games on NBC. Since temporarily dropping out of Yale in 1967 to become television’s first-ever Olympics researcher, no one has done more to expand the popularity of the Olympics and make his network the home of the Olympic Games since 1992. With his combination of creative vision and business savvy, he also led for 22 years NBC’s coverage of professional baseball, basketball and football, including several Super Bowls. His son Charlie is a 2005 Notre Dame graduate.

Archbishop Wilton Gregory (doctor of laws) — A native of Chicago, Gregory is the sixth and current leader of the Archdiocese of Atlanta. Educated at Loyola University and St. Mary of the Lake Seminary, he was ordained in 1973. As bishop of Belleville, Ill., he served as president of the U.S. Conference of Catholic Bishops, becoming in 2001 the first African-American ever to head an episcopal conference. Pope John Paul II appointed him archbishop of Atlanta in 2004. He has written extensively on Church issues, including pastoral statements on the death penalty and euthanasia/physician-assisted suicide, and has published numerous articles on the subject of liturgy.

Kevin Hasson (doctor of laws) — A leading legal advocate of religious freedom, Hasson is founder and president of the Becket Fund for Religious Liberty. He created this nonpartisan public-interest law firm in 1994 to represent people of all faiths and has since advocated for clients ranging from Anglicans to Zoroastrians. A double major in economics and theology, he went on to receive a master’s degree in theology and a law degree in 1985 — all from Notre Dame. He served in the Justice Department and advised the White House on church-state relations and constitutional issues under then-Deputy Assistant Attorney General Samuel Alito. He has written many articles on religious liberty, as well as a book titled “The Right to be Wrong: Ending the Culture War over Religion in America.”

Editor’s note: Muhtar Kent has withdrawn as an honoree due to a scheduling conflict.

Muhtar Kent (doctor of laws) — A Turkish-American business executive, Kent is the chairman of the board and chief executive officer of The Coca-Cola Company. Born in New York City when his father served as Turkish consul-general, he completed high school in Turkey before earning undergraduate and graduate degrees in London. He started with Coca-Cola in 1978, first learning the company’s marketing and distribution systems as a truck driver. He rose through the company’s management ranks in Central Asia and Europe until 1999, when he became president and CEO of the Efes Beverage Group, a multinational enterprise based in Istanbul. He rejoined Coca-Cola after six years and became its CEO in July 2008.

Joseph O’Neill (doctor of laws) — A Notre Dame alumnus, parent and member of the Board of Trustees, O’Neill is the managing partner of O’Neill Properties, a Texas oil and gas production company. Born in Midland, Texas, he earned his bachelor’s degree from Notre Dame and graduate degree from University of Michigan before serving in the U.S. Army Special Forces. He moved back to Midland in 1972 and joined the oil business his father, also a Notre Dame alumnus and Trustee, had started in the 1950s. His service to Notre Dame includes acting as president of the Notre Dame Alumni Association and a member of the College of Engineering Advisory Council. He is the benefactor of O’Neill Family Hall, a men’s residence hall dedicated in 1996, and was elected to the Board of Trustees in 2001.

Rev. David Tyson, C.S.C. (doctor of laws) — A member of the Board of Trustees and former president of the University of Portland, Tyson is currently the provincial superior of the United States Province of the Congregation of the Holy Cross. Born in Gary, Ind., he earned a bachelor’s degree in sociology and a master’s degree in theology at Notre Dame, as well as a doctorate in education at Indiana University. After his ordination in 1975, he held various positions at Notre Dame, including admissions counselor, assistant rector, business professor, executive assistant to the president and vice president for student affairs. He was selected to lead the University of Portland in 1990 and led a major expansion of its campus, endowed teaching chairs and funding, including a tripling of the university’s endowment. He became provincial superior in 2003.

James Wagner (doctor of engineering) — An award-winning teacher and scientist and a prolific author, Wagner is the 19th president of Emory University. A native of Silver Spring, Md., he earned a bachelor’s degree in electrical engineering from the University of Delaware and master’s and doctoral degrees in engineering from Johns Hopkins University. He joined the engineering faculty at Hopkins in 1984 and later became a department chair before moving to Case Western Reserve University in 1998. A strong advocate of liberal education, he served as a dean, provost and interim president for five years at Case Western. He became Emory’s president in 2003 and has continued to speak and write prolifically, especially on the relationship between ethics, science and the role of the university.

Carolyn Woo (doctor of laws) — The Martin J. Gillen Dean of Notre Dame’s Mendoza College of Business from 1997 to 2011, Woo is now president and CEO of Catholic Relief Services. A native of Hong Kong, Woo was educated by Maryknoll sisters through secondary school there before attending Purdue University, where she earned bachelor’s, master’s and doctoral degrees. She joined the faculty at Purdue in 1981 and eventually rose to director of the Krannert School of Management and associate executive vice president for academic affairs. She came to Notre Dame as Mendoza’s dean in 1997 and quickly became a leading voice for integrating Catholic faith and business excellence, as evidenced by Mendoza’s focus on ethics and its top ranking for undergraduate business schools for the last three years.