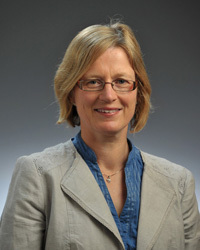 University of Notre Dame theologian Celia Deane-Drummond has been chosen to lead a research team of theologians and scientists in residence at Princeton University for the 2012-13 academic year, to address questions of nature and nurture raised by the biological evolution of human beings.

Deane-Drummond, along with Dominic Johnson of the University of Edinburgh, will serve as senior research fellows for the Center of Theological Inquiry (CTI) to facilitate interdisciplinary dialogue for its “Inquiry on Evolution and Human Nature.” CTI will assemble of team of 12 other scholars in the fields of evolutionary biology, psychology, anthropology, religious studies and philosophy of science.

“Theological understandings need to face the challenge of science, but also within those theological traditions there is a wisdom that has relevance to how science is developing,” says Deane-Drummond, whose research seeks to bridge the gap between her two disciplines with publications including “Genetics and Christian Ethics,” “Ecotheology” and “Christ and Evolution.”

“It’s not just a one-way process of theology trying to come to terms with the explosion in scientific and biological knowledge; it’s also what theological perspective might have to say to the way the science is developing.”