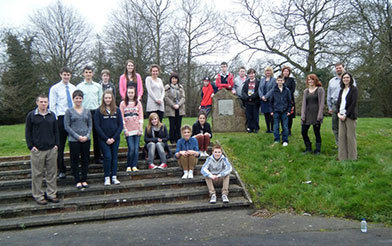 Seven University of Notre Dame students and two faculty members traveled to Northern Ireland this spring for a new Center for Social Concerns (CSC) seminar to explore the role of digital technology in peace building.

Historically, interaction between the two schools has been limited due to tensions between Protestants and Catholics during the Troubles, though most violence has ceased since the signing of the 1998 Good Friday Agreement. The Notre Dame students hoped to teach the students from Lurgan and Lismore the technological skills involved in creating a website, while encouraging collaboration with peers with whom they may not otherwise have had the opportunity to interact.

The Notre Dame team collaborated with these 13- and 14-year-old junior high students to study and create a website about lios mor, or “big fort” in Irish — the ancient ring fort on the grounds of Lismore that gives the school its name. They also created a Facebook page and YouTube channel to help generate interest in the site. The project was timed to coincide with the celebration of Lismore Comprehensive’s 40th anniversary this August.

Notre Dame’s involvement with the project was incorporated into an inaugural CSC seminar, “Digital Education in Northern Ireland.” Connie Mick, assistant director of the CSC, developed the idea for this trip four years ago.

Mick approached Sean O’Brien, assistant director of the Keough-Naughton Institute for Irish Studies, with her idea for the seminar, and O’Brien met with administrators from Lurgan and Lismore last fall to begin planning the project.

Joe Corrigan, the principal of Lismore, did much of the initial work to clear and publicize the ring fort when he became principal in 1976, and together he and O’Brien came up with the idea of creating a student-produced website about lios mor. 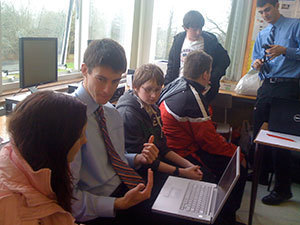 Over the next few months, O’Brien selected a team of Notre Dame students that represented a range of skill sets and courses of study, from film to IT management. To cover the trip, each Notre Dame student applied for and received grant money from various Notre Dame departments, including the Keough-Naughton Institute, the Glynn Family Honors Program and the Center for Undergraduate Scholarly Engagement.

Each Notre Dame student paired with one or two Irish students and developed a mentoring relationship with them over the course of the week.

Clodagh Cordner, a Lurgan student interested in archaeology, said of the experience, “(The project) gives me confidence to work with others, and builds friendships.”

The junior high students took initiative not only with their work on the site but their willingness to be open to cultural differences between students from the three schools. All of the students collaborated well together, and seemed to have a great time doing so. The group achieved its goal of having the site up and running by the end of the week.

Jonathan Ginesa of Lismore said, “The schools work really well together. The people I’ve met and worked with from Notre Dame and Lurgan have been great.”

The junior high students, who were eager to keep in touch with the Notre Dame students and with each other, took a great deal of pride in their work, which was made evident by their stories of going home each night during the week and showing their parents the progress that had been made that day.

Mick said the initiative and drive of these junior high students was what most impressed her about the experience.

“That’s the hallmark of community-based research,” Mick said. “The kids wanted to know more about the ring fort and they started every day ready to work, and innovated beyond anything we could have ever imagined.”

About the author: Kathleen Toohill is a member of Notre Dame’s Class of 2012.