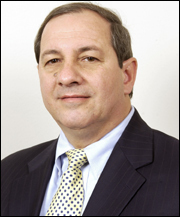 The relationship between Iran and the United States – tense at best over the past 25 years – worsened in recent days.p. First, the 9/11 Commission reported that a number of the hijackers involved in the terrorist attacks of 2001 passed unchallenged through Iran at some point during their planning processes. Then last week, Iran announced that it will resume enriching uranium, a step that may be a legitimate attempt to increase the nations energy options or, more ominously, could be part of a program to build a nuclear weapon.p. Despite the troubling signs, however, a University of Notre Dame political scientist says the United States should use a carrot rather than a stick in dealing with the Iranians.p. Responding to these actions by either isolating the Iranians via sanctions or attacking them would be wrong-headed U.S. policy for two reasons,said George Lopez, senior fellow in Notre Dames Kroc Institute for International Peace Studies.First, a punishing approach toward Iranian leaders has not produced desired results in the past. Often, in fact, it reinforced the hand of the hardliners. Second, there are numerous signs of change moving in directions favorable to the U.S. over the longer term.p. Lopez said that while the United States should continue to advocate that Iran refrain from aiding and abetting terrorists and that it not develop a nuclear arms program,a strategy of constructive engagement over these issues, rather than one of punishment and ostracism, is more likely to produce U.S. goals.p. Such a strategy, he said, would include U.S. support of Irans application to participation in the World Trade Organization and sanctions against companies and governments that supply centrifuges and related technologies to Iran.p. With a quarter century history of bad relations between Iran and the U.S., it is unlikely that any single initiative will reverse Tehrans course in the short-term,Lopez acknowledged.This may be especially true as long as a large contingent of U.S. troops is living next door in Iraq. But a reasonable movement from hostility to cautious cooperation can occur as a result of a smart and sustained U.S. policy of engagement. Policies that seek to punish, isolate and humiliate Iran are out of touch with current realities and are doomed to failure.p. _Media contact: George A. Lopez, 574-631-6972 or lopez.1@nd.edu _ p. p.