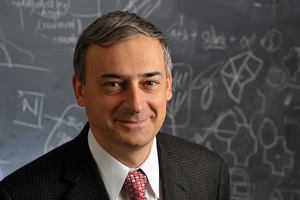 An interdisciplinary collaboration of six researchers, including four from Notre Dame, have received a three-year National Institutes of Health (NIH) grant to study the interplay of motility mechanisms during swarming of the bacterium Myxococcus xanthus. Their study is essential to understanding how millions of bacteria function in real environments.

Mark Alber, the Vincent J. Duncan Family Professor of Applied Mathematics and director of the Center for Study of Biocomplexity at the University of Notre Dame, is principal investigator of the team. The research team includes Zhiliang Xu from the Department of Applied and Computational Mathematics and Statistics; Danny Chen from the Department of Computer Science and Engineering; Joshua Shrout from the Department of Civil Engineering and Geological Sciences at Notre Dame; Igor Aronson from the Argonne National Laboratory and Dale Kaiser from the School of Medicine at Stanford University. Their three-year grant will cover $780,000 in research expenses.

The project will combine simulations using a new, three-dimensional multi-scale modeling environment and specifically designed experiments to study basic coordination events of M. xanthus motility described as swarming. This research will advance our understanding for how bacteria and other organisms function in real environments. The researchers will focus on the role of flexibility of cells, viscosity of extracellular polysaccharide, slime adhesivity and directional reversals in resolving collisions, increasing alignment and optimizing swarming rate for M. xanthus.

While growing and dividing on the surface of laboratory agar plate assays, many different motile bacteria exhibit a coordinated motion known as swarming. Although a swarm has no leader and resembles in that way a school of fish or a flock of birds, the cells move in a way that never blocks the motion of another cell. Essentially, while we know bacteria (like M. xanthus) can work their way out of dense swarms, it is not understood how they do it. This research project will investigate such actions.

The combined simulation and laboratory approach will yield new biological insight into M. xanthus swarming because of the ability to conduct experiments on a computer (in silico) that are still difficult, if not impossible, to perform physically. A key aspect of this work will involve comparing predictions obtained in silico with laboratory experimental observations. Study of the M. xanthus social interactions will provide an opportunity to gain fundamental insight into how organisms discern, process, and respond to the chemical, physical, and biological cues present in their local environment. Model simulations will be implemented on the cluster of the graphics processing units (GPUs) at the Argonne National Laboratory.

Steven Buechler, chair of the Department of Applied and Computational Mathematics and Statistics, explains, “Many of the effects of bacteria result from their actions as a mobile colony, rather than as single cells. Interdisciplinary analyses such as this can lead to vital insight into infections, for example.”