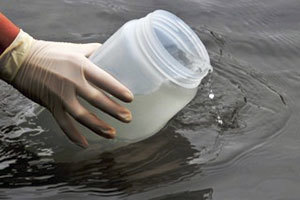 A new research paper by a team of researchers from the University of Notre Dame’s Environmental Change Initiative (ND-ECI) demonstrates how two cutting-edge technologies can provide a sensitive and real-time solution to screening real-world water samples for invasive species before they get into our country or before they cause significant damage.

“Aquatic invasive species cause ecological and economic damage worldwide, including the loss of native biodiversity and damage to the world’s great fisheries,” said Scott Egan, a research assistant professor with Notre Dame’s Advanced Diagnostics and Therapeutics Initiative and a member of the research team. “This research combines two new, but proven, technologies — environmental DNA (eDNA) and light transmission spectroscopy (LTS), to address the growing problem of aquatic invasive species by increasing our ability to detect dangerous species in samples before they arrive or when they are still rare in their environment and have not yet caused significant damage.”

Egan points out that eDNA is a species surveillance tool that recognizes a unique advantage of aquatic sampling: Water often contains microscopic bits of tissue in suspension, including the scales of fish, the exoskeletons of insects and the sloughed cell and tissues of aquatic species. These tissue fragments can be filtered from water samples, and then a standard DNA extraction is performed on the filtered matter. The new sampling method for invasive species was pioneered by members of ND-ECI, including Notre Dame’s David Lodge and Chris Jerde, Central Michigan University’s Andrew Mahon and The Nature Conservancy’s Lindsay Chadderton.

Egan explains that LTS, which was developed by Notre Dame physicists Steven Ruggiero and Carol Tanner, can measure the size of small particles on a nanometer scale (1 nanometer equals 1 billionth of a meter). LTS was used in the research for DNA-based species detection where the LTS device detects small shifts in the size of nanoparticles with short single-stranded DNA fragments on their surface that will only bind to the DNA of a specific species.

“Thus, these nanoparticles grow in size in the presence of a target species, such as a dangerous invasive species, but don’t in the presence of other species,” Egan said. “In addition to the sensitivity of LTS, it is also advantageous because the device fits in a small suitcase and can operate off a car battery in the field, such as a point of entry at the border of the U.S.”

The Notre Dame researchers demonstrated the work with manipulative experiments in the lab for five high-risk invasive species and also in the field, using lakes already infested with an invasive mussel, Dreissena polymorpha or the zebra mussel.

“Our work implies that eDNA sampling and LTS could enable rapid species detection in the field in the context of research, voluntary or regulatory surveillance and management actions to lower the risk of the introduction or spread of harmful species,” Egan said. “In the Great Lakes alone, 180 nonindigenous species have been established since European settlement, with about 70 percent arriving through the ballast tanks of transoceanic ships. Ballast water monitoring is one of many potential applications for LTS with ramifications for environmental protection, public health and economic health.”