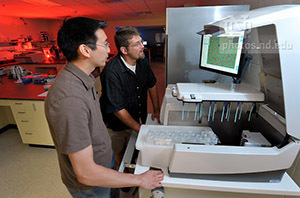 University of Notre Dame researcher Mike Ferdig is part of team of researchers who have demonstrated that so-called “humanized” mice can be an effective model to study parasites that cause malaria and resistance to malarial drugs. Their study appears in the June 1 edition of the journal Nature Methods.

Ferdig and fellow researchers from the University of Notre Dame joined with colleagues from the Center for Infectious Disease Research in Seattle and Texas Biomed in San Antonio to demonstrate that a mouse that has been genetically modified to express a human liver can serve as a surrogate “human host” to support the development of sibling malaria parasites (offspring) resulting from a genetic cross between two different parasite parent clones.

“Genetic crosses between parents that differ for a trait of interest are a powerful tool in biology, especially in organisms like fruit flies, yeast and Mendel’s famous pea plants for mapping the location of genes that make these traits,” Ferdig said. “But for the deadly pathogen that causes human malaria, a human host is required for the parasites derived from blood-fed mosquitoes to complete its essential ‘liver stage’ development to produce these genetic offspring.”

In the mid-1980s and over the ensuing 30 years, researchers at the National Institutes of Health (NIH) were able to generate three genetic crosses using chimpanzees with their spleens surgically removed in place of a human host. Sibling parasites derived in this way produced major breakthroughs in malaria research, including the identification of the gene that caused resistance to cholorquine, a powerful drug that was on track to eradicate malaria from the earth until drug resistance emerged. In spite of their value for research discovery, the challenges and expense of working with chimpanzees were daunting. Recently new NIH policies are phasing out the use chimps for medical research, closing the door entirely for making these genetic crosses.

Ferdig and his fellow collaborators have opened a new door by demonstrating that humanized mice can play this role. In a matter of months they put their put their distinct expertise together to generate three genetic crosses in these mice and characterize their chromosomal organization to show that large numbers of offspring with unique genetic profiles are being produced.

The Seattle researchers had previously mastered the technique of using these humanized mice to study liver-stage malaria. Their standard approach was to collect the infective stage of a single strain of parasite from mosquitoes that had fed on an infected blood meal in a controlled laboratory setting and inject these into the humanized mice.

“In the new Nature Methods paper, we mix different strains of parasites, one resistant to drug and the other susceptible, to get Mendelian recombination in the mosquito prior to injecting them into the mouse,” Ferdig said. “Consequently, we derive a set of siblings that include both sensitive and resistant types. My lab has always studied genetics, relying on the old chimp crosses, so it was a matter of putting our heads together, starting with a conversation at a conference in 2012, and combining our expertise. We then joined forces with the group in Texas to do genome sequencing to ‘map’ all of the recombination events, meaning how each genome of the progeny offspring differ from each other.”

By sequencing these parasite genomes across all the siblings the researchers will be able to find the mutations that cause important traits. These include new kinds of drug resistance mutations such as those contributing to resistance to the drug Artemisinin that is now sweeping through Southeast Asia and threatening the most important existing control strategies against dangerous multi-drug resistant forms of the parasite.

“We intend to optimize this method of making new crosses routinely in the lab, so that any new terrifying parasite, extra virulent or multi-drug resistant, can be brought from clinics to our labs and immediately put into a genetic cross to identify the cause of the trait and to indicate new ways to stop the parasite,” Ferdig said. “We hope to develop this system to be a powerful resource accessible to the worldwide malaria research community.”

Ferdig is associate chair of the Department of Biological Sciences at Notre Dame and a member of the University’s Eck Institute for Global Health. The Eck Institute for Global Health recognizes health as a fundamental human right and endeavors to promote research, training, and service to advance health standards for all people, especially people in low-and middle-income countries, who are disproportionately impacted by preventable diseases.