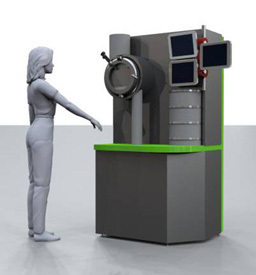 Pharmaceutical systems company Triskell has announced its intention to relocate its headquarters from Sarasota, Fla., to South Bend to take advantage of the research and commercialization benefits associated with the University of Notre Dame. The company will lease office and lab space in the University’s commercial accelerator, Innovation Park.

Triskell provides multi-functional solutions for the rapid and efficient development of tablet and capsule formulations. The company plans two product lines, known as the MultiProcessor and the MultiAnalyzer. The MultiProcessor will perform the process and characterization tasks associated with developing solid dosage forms.

The MultiAnalyzer includes a variety of probes that will monitor the processes in real-time, so as to provide Process Analytical Technologies (PAT) that ensure the high quality of products. The FDA is encouraging the use of PAT throughout the industry.

As envisioned, a core part of the MultiAnalyzer will be new terahertz technologies for spectroscopy and imaging being designed by Lei Liu, research assistant professor in Advanced Diagnostics & Therapeutics (AD&T) and the Department of Electrical Engineering; Scott Howard, assistant professor of electrical engineering, and collaborators at Purdue University’s Department of Industrial and Physical Pharmacy and School of Chemical Engineering.

“Moving our headquarters is a big decision for a young company,” says Triskell Founder Jean LeFloch, a 1975 Notre Dame graduate. “I found this region to be the best environment for my company to establish itself and grow. In addition to the perfect suitability of Innovation Park and the availability of a crucial research program on campus, the strong synergy that exists between the Michiana business community, the University of Notre Dame, and AD&T clearly elevated South Bend to the top of the sites I was considering.”

“The commitment of AD&T’s faculty and leadership made the final argument for the move,” he adds. LeFloch spent more than 20 years designing and marketing automated tableting systems for the global pharmaceutical industry.

Triskell will focus on smaller scales to address the cost and space-sensitive needs of smaller manufacturers and researchers, especially those in emerging pharmaceutical markets in Latin America, the Pacific Rim and Asia, most notably China.

“Research into the applications of terahertz energy is relatively new, but Notre Dame is a leader in the field,” adds Kirk Reinbold, managing director of AD&T. “We are excited to see our technologies act as catalysts for economic development activities.”

There may soon be other companies coming out of the University that follow Triskell’s path into terahertz markets. For example, LeFloch, Liu and Reinbold are currently mentoring Dina Imbabazi, a student in Notre Dame’s Engineering, Science, and Technology Entrepreneurship Excellence Masters Program (ESTEEM), as she prepares a business plan for a terahertz spectrometer company that also builds on Liu’s research.

Triskell intends to start work at Innovation Park in early 2012.