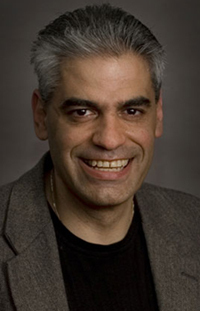 University of Notre Dame alumnus Miguel H. Diaz will be sworn in Friday (Aug. 21) as the United States ambassador to the Holy See in a ceremony at the U.S. State Department.

Unable to attend the ceremony because of a previous commitment, Notre Dame’s president, Rev. John I. Jenkins, C.S.C., has asked two fellow Holy Cross priests, both friends of Diaz, to represent him there.

Rev. James K. Foster, C.S.C., assistant dean of Notre Dame’s College of Science, and Rev. Edwin H. Obermiller, C.S.C., director of the office of vocations for the Indiana Province of the Congregation of Holy Cross, will attend both the State Department swearing-in ceremony and a subsequent luncheon hosted by St. John’s College (Minn.), where Diaz teaches theology.

Diaz, who earned master’s and doctoral degrees from Notre Dame in 1992 and 2000, respectively, is one of three alumni of the Notre Dame Graduate School now serving in the ambassadorial corps.

Notre Dame alumna Martha Larzelere Campbell also will be sworn in Friday as the U.S. ambassador to the Marshall Islands. Campbell, who has worked in the State Department’s foreign service for 29 years, earned a master’s degree in political science from Notre Dame in 1973.

Former U.S. Rep. Timothy Roemer, who earned master’s and doctoral degrees in political science from Notre Dame in 1981 and 1985, respectively, was sworn in as U.S. ambassador to India last month.