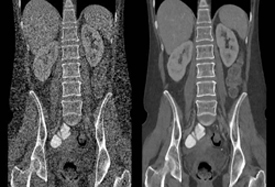 CT is an advanced form of spiral x-ray technology that physicians use to help diagnosis disease in their patients – including cancer, cardiac and neurological diseases, and other conditions – with the goal of significantly improving treatment plans and patient health outcomes. Since it was invented in the 1970s, CT scanning has helped save and improve millions of lives. Still, physicians and patients have traditionally had to balance the tremendous benefits of CT with the patient’s exposure to limited medical radiation dose used during scanning. As such, the public’s awareness of CT’s benefits and the potential risks from a radiation perspective has grown in recent years.

“Veo technology is a game-changer, plain and simple,” said Steve Gray, vice president and general manager of CT and Advantage Workstation for GE Healthcare. “Traditionally in CT there has been a trade-off between high image quality for the physician and low radiation dose for the patient. We’re hearing from hospitals that this trade-off is beginning to dissipate, as Veo delivers startlingly clear images at unprecedented low dose levels.”

The world’s first Model-Based Iterative Reconstruction technology, Veo is built on an advanced algorithm that was developed jointly by researchers at Purdue, Notre Dame and GE Healthcare. The three organizations signed a commercialization agreement allowing Veo to be commercialized through the Purdue Research Foundation’s Office of Technology Commercialization program and Notre Dame’s Office of Technology Transfer.

“We’re pleased to have our engineering research contribute to a viable new product, particularly in an area so critical to our economy and our well-being as revolutionary medical diagnostics devices,” said Bob Bernhard, vice president for research at Notre Dame. “We see the Veo project as a great example of close collaboration of university and industry.”

“The development of this discovery is another excellent example of how a collaboration between Purdue and another institution, in this case Notre Dame, has resulted in a viable product that is being commercialized,” said Joseph B. Hornett, senior vice president, treasurer and COO of the Purdue Research Foundation. “Last year, we signed 85 commercialization agreements to move Purdue discoveries to the public.”

Veo was granted Food and Drug Administration clearance in the U.S. earlier this year.

Charles A. Bouman, the Michael J. and Katherine R. Birck Professor of Electrical and Computer Engineering and a professor of biomedical engineering at Purdue University, and Ken Sauer, associate professor of electrical engineering at Notre Dame, developed the technology over the past two decades in collaboration with Jean-Baptiste Thibault, Jiang Hsieh and Zhou Yu. Thibault and Yu worked on the technology as graduate assistants under Bouman and Sauer and both currently work for GE Healthcare. 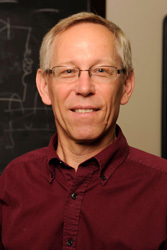 “Conventional CT scanning takes thousands of views from different angles to ‘see’ organs, and then creates a 3-D image of the person,” Bouman said. "Veo takes radiographic images digitally that use less light. A reduction in light means the radiation dosage is reduced. Then our computer algorithm uses model-based reconstruction more effectively so we can form a high-quality image with less radiation.

“Basically, Veo cleans up the noise or graininess and creates a sharper image.”

After simultaneously completing their Ph.D.s at Princeton University, Bouman and Sauer began working on the technology as assistant professors at Purdue and Notre Dame.

“Our opportunity to work closely with our collaborators at GE Healthcare was immensely important in getting these imaging ideas into the scanners,” Sauer said. “The fact the Jean-Baptiste and Jiang committed themselves to guiding this project and had direct access to other experts on every facet of the machines really tightened the feedback loop on algorithmic improvements.”

Funding for the research came in part from the National Science Foundation and GE Healthcare.

Notre Dame’s Office of Technology Transfer is the under the direction of the vice president for research and is responsible for research in the commercialization of Notre Dame technology. It assists the University community in bringing University innovations to the marketplace for the ultimate benefit of the public.