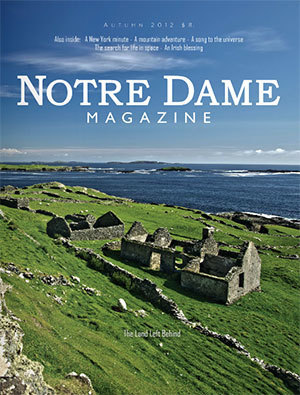 Three essays published in Notre Dame Magazine last year have been honored by inclusion in the 2013 edition of “The Best American Essays.”

“His Last Game,” an essay in the Autumn 2012 issue by 1978 University of Notre Dame alumnus Brian Doyle, editor of Portland Magazine, was listed among the year’s 26 best essays.

In addition, the collection listed the Summer/Fall 2012 issue of the Notre Dame’s literary magazine, Notre Dame Review, among the “Notable Special Issues” of the year and listed two essays from that issue, “The Three Lost Men” by Harry Mark Petrakis and “Then” by Thomas McGonigle, among the “Notable Essays” of 2012.

Notre Dame Magazine, available in print and online, is produced quarterly by the University of Notre Dame. The magazine reports on University events, institutional information, campus developments and alumni activities. It also contains feature articles and essays that aim to educate and inform readers in ways that explore moral, spiritual and ethical themes as they relate to society and current events.

The Notre Dame Review is a magazine of contemporary American and international fiction, poetry, criticism and art. In addition to showcasing such celebrated authors as Nobel laureates Seamus Heaney and Czeslaw Milosz, the review introduces new or lesser-known authors doing innovative and important work.