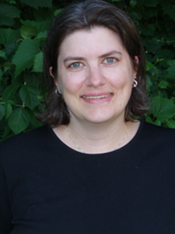 Brad Pitt walks around his neighborhood with photographers in tow. Britney Spears can’t pass by a newsstand without seeing herself on multiple tabloids. And teen sensation Miley Cyrus—aka Hannah Montana—reserves Disneyland to celebrate her birthday with 5,000 of her “closest” friends.

With lifestyles like these, it’s no surprise we tend to see celebrities as somehow different from ourselves.

Christine Becker, associate professor of film, television and theatre (FTT) at the University of Notre Dame, can relate. As a child, she was fascinated with Hollywood’s glamorous image and took every opportunity to read about stars in newspapers and magazines. As an adult, she then turned her childhood hobby into a research interest while pursuing her doctorate at the University of Wisconsin, where she focused her dissertation on 1950s film stars who crossed the boundary into television.

After graduate school, Becker set about expanding her dissertation into a book and turned to screenwriter Jim Jennewein, a 1977 Notre Dame graduate, for input and suggestions on her project. He offered some simple yet insightful advice: Make sure to think about stars as real people with real jobs who are trying to succeed in a brutal industry.

“I had always thought of stars as these glorious, fantastical people, and that even in the research, they’re almost figureheads more than actual people,” Becker recalls. “It was an angle at which I hadn’t thought of it—of stars as actual, ordinary human beings who are trying to get through.”

That challenge was never more apparent than when she was studying Betty Hutton, star of the 1950 big-screen hit “Annie Get Your Gun” and later, television’s “The Betty Hutton Show.” In her search for information, Becker found herself on eBay purchasing personal videotapes and scrapbooks, which eventually led her to Hutton’s caretakers. They said she was unwilling to be interviewed for the book because she felt she had been exploited and used throughout her life, leading her to become somewhat of a recluse in her later years.

“[Hutton] found it really frustrating and depressing that people expected her to be Betty Hutton circa 1948,” Becker says. “They expected her to be bouncy, excitable, the movie star, and at that point she was 85 and … an old, frail woman. She always felt like she was disappointing people because she couldn’t live up to that.”

In “It’s the Pictures That Got Small: Hollywood Film Stars on 1950s Television,” published by Wesleyan University Press, Becker gives readers an inside look at not only the individual experiences of stars like Hutton but also a period of great transition in the film and television industries. She notes that perceptions of celebrity were redefined as the classic studio system fell apart and many stars moved from film to television—previously seen as a step down—without harming their reputations. Such changes represented an important point in the evolution of pop culture through the decades, another research area in which she’s interested.

“That’s the classic paradox of stardom—that they’re both extraordinary and ordinary,” says Becker, who teaches a class on media stardom and celebrity culture. “The film industry often wants to exploit a sense of ordinariness so that we feel connected to them, and yet they live extraordinary lives of affluence and wealth. But it’s almost as if the ordinary has also gotten more salacious than ever before, so the ordinary is about affairs and drug use and rehab.”

Since joining Notre Dame’s faculty in 2001, Becker has helped create a television concentration within the FTT major. This past year, 55 of the more than 200 FTT majors studied on the television track, and its popularity continues to grow.

“Our classes are a place where students are allowed to take television seriously, and to dig into it in a deep way that they don’t get in other places,” she says. “I’m pleased that we have a place for our students to do that.”

Becker already is at work on her next book, in which she compares contemporary British and American network television. She also is writing two book chapters, one on Clark Gable and one on Paul Newman, for the forthcoming book “Star Decades: American Culture/American Cinema.”