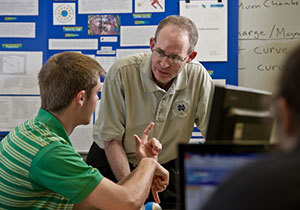 Researchers and educators around the world now have access to data that CERN has recently made public from the Large Hadron Collider (LHC) experiment — considered to be one of the largest international scientific collaborations in history. Two programs managed at the University of Notre Dame, QuarkNet and I2U2, have played important roles in developing tools and programs for the early use of this data that could address some of the most fundamental questions about the origin and composition of the universe.

On Nov. 20, CERN launched an Open Data Portal in which data from collision events produced by the LHC experiments were made available online for the global research community, including students and citizen scientists. During LHC experiments, groups of protons are smashed together at close to the speed of light, resulting in head-on collisions that produce short-lived particles that fly out and into the Compact Muon Solenoid (CMS) detector.

Data from the study of these particles could give clues about how nature behaves at a fundamental level. The first high-level, analyzable collision data from the CMS, originally collected during the first run of the LHC in 2010, is now available through the Open Data Portal. But the datasets are quite large and complex, so the Notre Dame programs and others have created tools to utilize the data. According to the CMS experiment, “While the data are in a processed format that is good for analysis, they are still quite complex, and performing an analysis using these data is difficult: It takes CMS scientists working in groups and relying on each other’s expertise many months or even years to perform a single analysis that must then be scrutinized by the whole collaboration before a scientific paper can be published.”

QuarkNet and I2U2 helped develop programs such as the CMS Masterclass and the CMS e-lab in order to use the data. Through the CMS Masterclass, high school students and teachers unite to become particle physicists for a day, learning some of the basics of particle physics, and then using tools developed by QuarkNet to analyze a sample of CMS data. At the end of the class, they meet with CMS physicists and other groups of students, sometimes through international video teleconferencing, to discuss their results. The CMS e-lab guides students through a self-directed study that goes into more depth and engages the students and educators in a more sophisticated treatment of these data.

The CMS experiment recognized in particular the contributions of QuarkNet staff member and Notre Dame physicist Tom McCauley, who is based at CERN, and serves as the liaison to the national QuarkNet Program. Mitchell Wayne, professor of physics, principal investigator (PI) for the national QuarkNet program and co-PI of the I2U2 Program, said, “These outreach programs help educate and inspire the next generation of scientists. They demonstrate the interesting and creative ways these data can be used by high school teachers and students.”

Mike Hildreth, a professor of physics at the University of Notre Dame and PI of the DASPOS (Data and Software Preservation for Open Science) project, has worked extensively with the data preservation experts on the CMS experiment to help define the design of the CERN Open Data Portal that hosts the data and software. The DASPOS project is involved in knowledge preservation in High Energy Physics and other sciences. Charles Vardeman, computational scientist in the Center for Research Computing, as well as Natalie Meyers and Rick Johnson in the Center for Digital Scholarship in the Hesburgh Library are also part of the DASPOS project and have been collaborating closely with the portal designers as they work to create a new metadata description of the stored data and analysis techniques that will allow prospective users to search for interesting data and techniques in the data archives.

With headquarters in Geneva, Switzerland, CERN is the European Organization for Nuclear Research and is the world’s leading laboratory for particle physics.