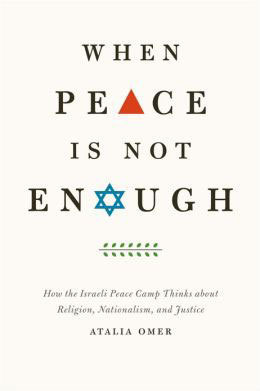 University of Notre Dame religious studies and peace scholar Atalia Omer shows how re-examining Jewish-Israeli identity can contribute to peace building in Israel and Palestine in her recently published book.

“When Peace is Not Enough: How the Israeli Peace Camp Thinks about Religion, Nationalism, and Justice,” recently published by University of Chicago Press, focuses on the perceptions and histories of Israel’s most marginalized groups — Palestinian Israelis, Arab Jews and non-Israeli Jews — and their role in the Israeli peace movement, which was born in 1978 during peace talks between the leaders of Israel and Egypt.

“The dominant discourse about the Israeli-Palestinian conflict focuses on European Jewish identity and history, but men and women with hybrid identities may provide creative resources for peace building,” said Omer, assistant professor of religion, conflict and peace studies at the University of Notre Dame’s Kroc Institute for International Peace Studies. “If you think about identity differently, what you are willing to negotiate will be different.”

Omer, who grew up in Jerusalem and has participated in the Israeli peace movement her entire life, said that when nationality is defined using exclusive ethnic and religious terms, discussions about multiculturalism, ethnicity, religion and nationalism take place within discriminatory and unjust parameters.

“A nation must be redefined in more inclusive terms,” Omer said. “Examining people who ‘don’t fit’ has value beyond Israel — if you look at any conflict, you will see all kinds of hybrid identities that offer critiques of existing narratives as well as creative possibilities for peace building.”

“Timely and inspirational, ‘When Peace Is Not Enough’ challenges the conventional wisdom on the Israeli-Palestinian conflict — and on the so-called peace process,” wrote Yehouda Shenhav, author of “The Arab Jews: A Postcolonial Reading of Nationalism, Religion and Ethnicity.” “Atalia Omer’s fresh and original perspectives … deserve to be read by everyone interested in the theoretical richness of the concept of liberal-nationalism.”

“Ranging widely over political theory, cultural studies, history and religious studies — and with an impressive command of comparative politics across the globe — ‘When Peace Is Not Enough’ is a stunning and accomplished work and an intellectually and politically courageous one,” wrote Robert Orsi, editor of “The Cambridge Companion to Religious Studies.”

Omer earned her Ph.D. from the Committee on the Study of Religion at Harvard University. Her research interests include the relationship between religion, nationalism and peace building; the role of diasporas in conflict transformation and peace; and multiculturalism as a framework for conflict transformation and as a theory of justice. She is a faculty affiliate of Notre Dame’s Center for the Study of Religion and Society. She was also the recipient of a research fellowship from Notre Dame’s Institute for Advanced Study.