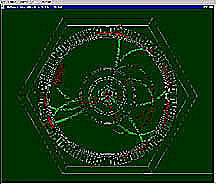 Yesterdays announcement of the 2008 Nobel Prize in Physics also served as a reminder of the prominent role three University of Notre Dame researchers have played in the field of particle physics.

The Nobel Foundation honored Yoichiro Nambu of the Enrico Fermi Institute at the University of Chicago for thediscovery of the mechanism of spontaneous broken symmetry in subatomic particles.

Makoto Kobayashi of the High Energy Accelerator Research Organization in Tsukuba, Japan, and Toshihide Maskawa of the Yukawa Institute for Theoretical Physics at Kyoto University were recognized for their discovery ofthe origin of broken symmetry which predicts the existence of at least three families of quarks in nature.

Notre Dame physicists Ikaros Bigi, John LoSecco and Colin Jessop have joined Kobayashi and Maskawa in making key contributions to the understanding of how matter gained the upper hand over antimatter in the universe.

An asymmetry between matter and antimatter would leave a residue when equal quantities meet and would explain why the universe is not a vast empty void.

In 1964, James Cronin and Val Fitch of Brookhaven National Laboratory in New York first detected the difference between matter and antimatter, referred to as CP violation, as a tiny defect in the decays of particles known asK mesons.Cronin and Fitch shared a Nobel Prize for their work.

In 1966, Soviet physicist Andrei Sakharov, another Nobel laureate, pointed out that CP violation might explain the observed excess of protons and neutrons over their antiparticles in the universe.

In 1973, Kobayashi and Maskawa showed how CP violation could be incorporated into the so-called Standard Model of the fundamental forces of nature.

In a paper published in 1981, Bigi, Anthony Ichiro Sanda and Ashton Carter pointed out that certain decay modes for so-called B mesons, which are 10 times heavier than K mesons, would have to show large CP asymmetries if the Standard Model was correct.

TwoB factoriesfacilities that accelerate electrons and positrons, make them collide head-on and analyze the resulting production and decay of B and anti-B mesonswere built to study these phenomena. One is located at the Stanford Linear Accelerator Center (SLAC) in California and is operated by an international group of scientists, including LoSecco and Jessop, known as the BaBar group. The other B factory is located at the Japanese National Laboratory for High Energy Accelerator Research (KEK) and is operated by a group known as BELLE.

In July 2001, LoSecco, Jessop and the BaBar collaboration submitted a paper for publication showing the observation of a large CP violation in the decays of neutral B mesons as predicted by Bigi, Sanda and Carter in 1981. Two weeks later, the BELLE collaboration published very similar findings.

This was the first observation of the CP violation outside the system of K mesons and it agreed with the expectations based on the Standard Model. The findings represented the largest direct evidence to that time for nature favoring the existence of matter over antimatter.

The variations might help explain why, when the universe blossomed into being in the big bang roughly 13 billion years ago, all the matter that had been created was not obliterated by the equal amount of antimatter also generated.

Bigi and Sanda shared the 2004 J.J. Sakurai Prize in theoretical particle physics for their research into CP violation in B decays.