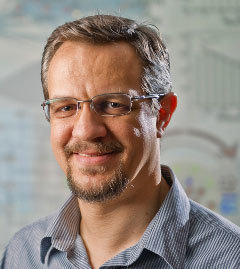 Researchers at the University of Notre Dame have designed a simple, yet highly accurate traffic prediction model for roadway transportation networks. They have recently published their work in the journal Nature Communications.

“Transportation networks and in particular the highway transportation network are like the body’s circulatory system for the nation,” says Zoltán Toroczkai, professor of physics at the University of Notre Dame, who co-authored the study with physics graduate student Yihui Ren and national and international collaborators.

The team’s model is built on principles from physics similar to those that describe the current flows in circuits. However, it also addresses the uncontrolled human dimension for both the choice of destination and the choice of pathway to the destination. The choice of destination is based on an earlier model by Filippo Simini, Marta González and others that takes into account the reasons why people travel, such as commuting to a job. That study is coupled with a model of the cost considerations people use to choose which path to take, such as favoring a quicker interstate route over a shorter but slower road.

“We tend to consider time-based costs rather than distanced-based costs when traveling,” Toroczkai says. “The majority of people, at least in the U.S., are worried about the time they spend on the road. While it seems natural, our work demonstrates that quantitatively.”

Researchers applied their model to the U.S. highway network with 174,753 road segments and 137,267 intersections and compared its predictions to actual observed traffic data. When the model assumed that people choose paths to save time, it was far more accurate than previous models including those based on adjustable parameters. The model was less accurate when it considered paths chosen to save distance, demonstrating that travelers put more value on saving time.

“The roadway network has evolved organically over hundreds of years, and its properties encode the modalities in which our economy interacts across space. However, unlike in electronic circuits in which we know precisely all the flows (currents) by design, it is much harder to determine flows in transportation networks, due to the human dimension of the traffic.”

“It is based on the right principles—principles that actually describe human travel,” Toroczkai says. “Its first-principles based nature is what is important.” For this reason, the model can be directly used also when part of the network is disabled, perhaps by a natural disaster or nuclear event, to predict the impact on the remainder of the network.

Toroczkai, who is the co-director of the Interdisciplinary Center for Network Science and Applications at Notre Dame, co-authored the paper titled, “Predicting commuter flows in spatial networks using a radiation model based on temporal ranges” with Yihui Ren at the University of Notre Dame, Mária Ercsey-Ravasz of Babes-Bolyai University in Romania, Marta C. González of M.I.T, and Pu Wang of Central South University in Hunan, China.