Rev. John I. Jenkins, C.S.C., president of the University of Notre Dame, joined in paying tribute to President George H.W. Bush upon his passing Friday night (Nov. 30). The 41st president of the United States received an honorary degree from Notre Dame and visited the campus on four other occasions – more than any other president.

“Notre Dame joins with our nation and world in mourning the passing of President Bush,” Father Jenkins said. “He was the epitome of a public servant, not just in the Oval Office, but in his eight years as vice president, his many years as a congressman, ambassador and CIA director, and in his service in the U.S. Navy during World War II. We were fortunate to host him at Notre Dame on five occasions, and in each instance, the honor was ours. Our prayers are with the Bush family.”

Rev. Edward A. Malloy, C.S.C., Notre Dame’s president from 1987 to 2005, presented Bush with an honorary doctor of laws degree at the University’s 1992 Commencement Ceremony and worked on two of the president’s major initiatives.

“I had the privilege of serving on President Bush’s Drug Advisory Council and his Points of Light Foundation,” Father Malloy said. “I found him to be a leader deeply committed to the country he had been elected to serve, a gracious host and a down-to-earth person. He recognized the importance of American higher education and he sought to enhance it. He also sought to promote a culture of citizen engagement with the great issues of the day. 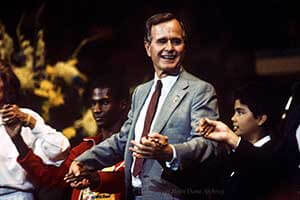 In the University’s 1992 sesquicentennial year commencement, Bush delivered an address on family values and service to community.

The American family is “an institution under siege,” Bush said. “Today’s crisis will have to be addressed by millions of Americans at the personal, individual level for governmental programs to be effective. And the federal government, of course, must do everything it can do, but the point is, government alone is simply not enough.”

The University’s honorary degree citation read in part: “The forty-first occupant of the White House, he has faced international and domestic challenge alike with personal integrity and a measured confidence born of faith in the resiliency of the Republic and its people.”

One week before his election to the presidency in 1988, Bush made a campaign stop at Notre Dame, where he spoke to more than 2,000 students, faculty and staff at the Stepan Center, speaking of the “great divide” between his values and those of Democratic nominee Michael Dukakis.

A year earlier, Bush spoke at the closing ceremony of the International Special Olympics Games, which were held at Notre Dame. He also attended Notre Dame football games in 1986 and 2001.