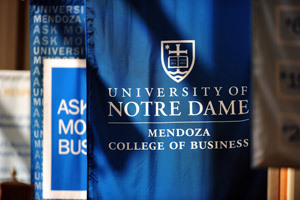 The University of Notre Dame MBA ranked No. 20 among U.S. business schools in the Bloomberg Businessweek magazine’s biennial survey, “The Best U.S. Business Schools 2012,” released Thursday (Nov. 12). The program, located in the Mendoza College of Business, jumped four spots from its 2010 ranking.

“We continually focus on providing the rigorous, values-based education that Notre Dame has always stood for,” said Mary Goss, senior director of the Notre Dame MBA. “But over the past two years, we’ve put a great deal of effort into enhancing our career development curriculum and engaging in an aggressive outreach to corporations across the country. We’re very proud of our students, who have competed well in an incredibly difficult hiring environment.”

The program rose significantly in the recruiter ranking to 18 in 2012 from 33 in 2010. It also earned “As” for career services, teaching quality, critical thinking and leadership skills.

The Bloomberg Businessweek ranking is based on three elements: a survey of newly minted MBAs, a poll of corporate recruiters and an evaluation of faculty research output. The MBA survey, which measures satisfaction with all aspects of the b-school experience, is combined with two previous MBA surveys. The corporate poll, which asks recruiters to identify the schools that produce the best graduates, is also combined with two previous recruiter surveys.

Finally, Bloomberg Businessweek tallies the number of articles published by each school’s faculty in 20 top journals and reviews of their books in three national publications. The total for faculty size is then adjusted and an intellectual-capital rating is assigned for each school. The MBA surveys and the recruiter polls each contribute 45 percent to the final ranking, with the intellectual-capital ranking contributing the final 10 percent.

The Notre Dame MBA, which offers one- and two-year programs, is noted for its innovative teaching in the area of problem solving and for its emphasis on personal and corporate ethics as well as social responsibility. It was ranked No. 4 in the Aspen Institute’s 2010-2011 “Beyond Grey Pinstripes,” a biennial ranking and survey of top U.S. business schools’ incorporation of social and environmental stewardship into their curricula and research.