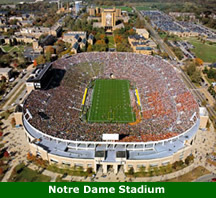 To fund repairs to historic Notre Dame Stadium, the University of Notre Dame announced today the sale of 5,000 football season tickets beginning in 2007 – the first such offering in more than three decades. The University also announced that, in response to unprecedented demand, it is instituting changes to several policies that will increase ticket access for alumni in the general football ticket lottery.

The 5,000 season tickets will be sold first to people directly affiliated with Notre Dame and then to the general public. In addition to the face value of the tickets, the cost will include an annual ticket rights fee based on seat location: $2,000 per ticket for sideline seats, $1,500 for corner seats, and $1,250 for end zone seats.

The revenue generated through the ticket plan will be used to assist in paying for repairs and ongoing preservation of the 76-year-old Notre Dame Stadiums original seating bowl. The exact cost of the project is yet to be finalized, but is expected to exceed $40 million.

University officials studied other revenue-generating options – including the addition of luxury boxes – before deciding on the ticket rights fees.

Notre Dame Stadium is a legendary landmark in American athletics, and we are committed to preserving and maintaining both its structural integrity and its historic look and feel,said John Affleck-Graves, executive vice president of the University.By providing a rare opportunity to purchase Notre Dame football season tickets, we are developing revenue for this important project, giving fans a chance to invest in the future of The House that Rockne Built,and protecting current and future resources necessary for our primary mission of teaching and research excellence.

Engineering studies have indicated that the structural supporting frame of the stadium remains in good condition. However, freeze/thaw damage over three-quarters of a century has led to deterioration of the seating bowl concrete. Stadiums of the same vintage as Notre Dames facility at theUniversityofMichiganandOhioStateandPurdueUniversitieshave faced similar maintenance issues in recent years. The repair project was to begin last spring, but the University put it on hold to conduct further engineering analysis.

Fans interested in purchasing season tickets can find information on the process on the Web at http://stadiumpreservation.nd.edu . A waiting list for the potential future sale of season tickets will be established after all of the current allotment has been sold.

Affleck-Graves emphasized that none of the new season tickets will be drawn from tickets currently available in the general alumni lottery. The 5,000 tickets will come from season tickets that have been returned over the past several years, as well as a reduction in internal University ticket allocations, he said.

Though unrelated to the season ticket offering, the University also has responded to the high demand for Irish football tickets in the 2006 general alumni ticket lottery by revising policies that will reallocate tickets among several groups in order to increase opportunities in the general lottery.

Notre Dame has the most inclusive alumni ticketing process of any high-demand program in the nation, and we remain committed to continuing that access,Affleck-Graves said.

He added that when Notre Dame adds an eighth off-site home game in the near future, ticket opportunities for alumni will improve even more.

Affleck-Graves said that Notre Dame also is committed to actively monitoring and enforcing its ticket resale policy in an effort to curb resale for profit and ticket fraud. Morethan 3,400 tickets have been suspended or revoked in the past three years, including 1,700 this year. Suspected resale violation information can be sent to seller1@nd.edu .