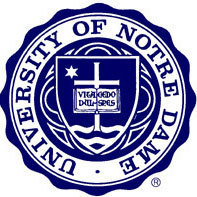 Father Collins will replace Rev. James King, C.S.C., whose term on the Board as religious superior expires June 30. The 12 Fellows — six lay men and women and six priests of the Congregation of Holy Cross, Notre Dame’s founding religious community — are the University’s ultimate governing body. They elect the Trustees, adopt and amend the bylaws, and are specifically charged with maintaining Notre Dame’s Catholic character.

Father Collins was ordained a Holy Cross priest in 1982 after graduating from Notre Dame in 1977. He is a professor of sculpture in the Department of Art, Art History and Design at the University, and served as chair of the department from 1997 through 2003. Father Collins studied at the University of California at Berkeley and received a master of fine arts degree in sculpture from Claremont Graduate University.

Richer is chief financial officer and operating committee member of Putnam Investments where she oversees finance, trustee relations and technology. A member of the College of Arts and Letters Advisory Council, she has also served on the University’s Accountancy Advisory Board. Following her graduation from Notre Dame, Richer worked for Arthur Andersen & Company, and later during a 25-year career with Fidelity Investments held a number of key roles, including chief financial officer and a member of the operating committee.

Spruell is a vice chairman of Deloitte LLP where he serves as managing principal of the Central region and leader of the organization’s Chicago office. He oversees Deloitte’s national strategy for client and business growth and strategic positioning in various markets. He has held a number of leadership positions at Deloitte, including managing director of Deloitte Touche Tohmatsu Limited’s Global Financial Advisory practice and chief of staff to the U.S. chief executive officer. A member of the College of Engineering’s Advisory Council and Notre Dame Monogram Club Association, he earned undergraduate and graduate degrees from Notre Dame and was co-captain of the football team.

Rooney is chairman of Claddagh Investments, a private investment firm, and previously served as a senior executive of ServiceMaster Co. and Waste Management Inc. He previously was a member of the advisory council of Notre Dame’s College of Engineering.

Also joining the Board in an ex officio capacity as the president-elect of the Alumni Association is Bob Cronin. He will replace James Zavertnik, whose term expires June 30. Cronin is president of MAC Graphics Group in Elmhurst, Illinois, and also serves as head track and field coach at IC Catholic Prep in Elmhurst. He is the father of four Notre Dame graduates and a past president of the Notre Dame Club of Chicago.