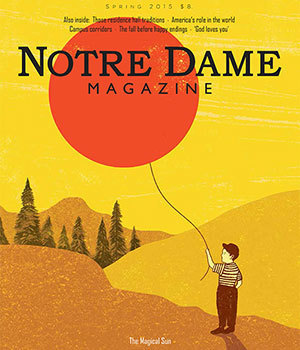 Two essays published in Notre Dame Magazine last year have been honored by inclusion in the 2016 edition of Robert Atwan’s “The Best American Essays.”

Temple joined the staff of Notre Dame Magazine in 1981 and has been the editor since 1995. He has written dozens of articles and essays for Notre Dame Magazine and others on a wide range of topics and is the author of “Back to Earth: A Backpacker’s Journey into Self and Soul.”

Livatino’s essays have appeared in The Sewanee Review, “Writing on the Edge,” “River Teeth” and other publications. Seven of his pieces have been named Notable Essays of the Year in the Best American Essays annual.

Notre Dame Magazine, available in print and online, is produced quarterly by the University of Notre Dame. The magazine reports on University events, institutional information, campus developments and alumni activities. It also contains feature articles and essays that aim to educate and inform readers in ways that explore moral, spiritual and ethical themes as they relate to society and current events. Four essays from the magazine were included in the 2015 edition of “Best American Essays.”