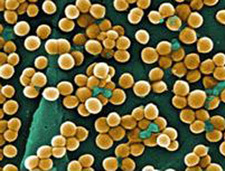 A recent paper by Kathleen Eggleson, a research scientist in the Center for Nano Science and Technology (NDnano) at the University of Notre Dame, provides an example of a nanotechnology-related safety and ethics problem that is unfolding right now.

The world of nanotechnology, which involves science and engineering down at billionths-of-a-meter scales, might seem remote.

But like most new advances, the application of that technology to everyday experience has implications that can affect people in real ways.

If not anticipated, discussed or planned for, some of those implications might even be harmful.

The problem that Eggleson describes is that hospital-acquired infections are a persistent, costly and sometimes fatal issue. A patient goes in for one condition, say an injury, but ends up being infected by a microorganism picked up in the hospital itself. That microorganism might even have developed a resistance to conventional drug treatments.

The solution is that engineers are developing new and innovative ways of coating medical materials with nano-sized particles of silver, an element that has long been known for its antimicrobial properties. These particles are being applied to hard surfaces, like bedrails and doorknobs, and to fabrics, such as sheets, gowns and curtains, by a growing number of medical supply companies. And these new materials are proving effective.

“Nanosilver coatings have made life-saving differences to the properties of typical hospital items,” Eggleson says. “Just this last December, a textile made by a Swiss company was the first nano-scale material approved as a pesticide by the EPA.”

The possible new danger is that the vast majority of bacteria and other microorganisms are actually neutral, or even beneficial, to human life and a healthy environment. For example, some bacteria are needed to maintain appropriate levels of nitrogen in the air, and others, living inside the human body, are critical to both vitamin synthesis and digestion. 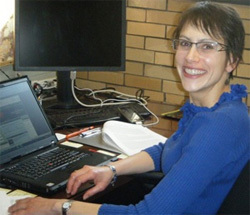 So overuse of nanosilver products, especially outside of clinical environments, could pose a danger to needed microorganisms, and enable resistant strains to flourish.

“Under most conditions, the preservation of microbial biodiversity is a benefit,” explains Eggleson.

“In fact, those who would use these potent new antimicrobial technologies for frivolous uses, such as for odor control, work directly against the U.S. National Nanotechnology Initiative’s goal of responsible nanotechnology development.”

Eggleson came to the Center for Nano Science and Technology last year to study and prompt discussion of problems like these.

“NDnano is expanding its scope into studies of the societal impact of nanotechnology,” explains Wolfgang Porod, Frank M. Freimann Professor of Electrical Engineering at Notre Dame and director of the center. “This is the background for bringing Kathy on board.”

To facilitate such discussion, Eggleson initiated a monthly meeting group, called the Nano Impacts Intellectual Community, which brings together Notre Dame researchers from across campus, visiting scholars and authors from outside the university, and leaders from the local area to probe nanotechnology topics in depth.

“I appreciate being a part of this on-going conversation,” says Glenn Killoren, an attorney at Barnes & Thornburg LLP and a regular Nano Impacts attendee. “Nanotechnology isn’t just something that happens in research labs anymore. It’s a small but growing part of our lives, and both scientists and non-scientists need to think about its effects.”

“We try to do as much as we can to engage the community this exciting area,” says Eggleson.

The center’s expanding work on the societal impacts of nanotechnology has been made possible, in part, by one of the university’s Strategic Research Investments (SRIs), which represent a commitment of internal funds and other resources, supplementing funding from external grants and gifts, to advance excellence in research.

In addition, Nano Impacts is supported by the Office of the Provost’s Initiative on Building Intellectual Community.