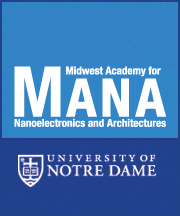 Indiana Gov. Mitch Daniels announced today (March 25) the establishment of the Midwest Academy for Nanoelectronics and Architectures (MANA), a new research consortium led by the University of Notre Dame and designed to discover and develop the next nanoscale logic device, which will be the basic building block of future computers.

The Midwest Academy for Nanoelectronics and Architecture is a giant stride in the development of the technology of small things,Fr. Jenkins said.It promises to move us past the limits currently imposed by the laws of physics and enable the building of advanced devices, circuits and systems that will be faster, more powerful and more compact than those that currently power our cell phones, computers and other electronic devices.

Direct support for MANA from the public and private sectors and the participating universities will total more than $25 million over three years. Notre Dame also will offer other additional support. The consortium organizers anticipate that additional funds will be obtained through federal grant applications under the National Nanotechnology Initiative, for which the federal government plans to allocate $1.5 billion a year.

The SRC-NRI has previously funded three centers: at the University of Texas, UCLA and the University of Albany. The addition of MANA to the current national Nanoelectronics Research Initiative brings the considerable research expertise of Midwestern universities, and national laboratories located in the region, to the effort to develop a new class of semiconductor materials and devices.

Conventional microelectronic technology has relied on shrinking transistors to produce increasingly smaller, faster and cheaper devices ranging from cell phones and personal music devices to laptop computers. However, because the laws of physics prevent conventional devices from working below a certain size, this method is nearing its physical limits. The continued shrinking of transistors will lead to various problems with electric leakage, power consumption and heat.

MANAs mission will be to explore and develop advanced devices, circuits and nanosystems with performance capabilities beyond conventional devices.

This is a tremendous opportunity for us to discover and shape the development of nanoelectronics and to make it happen here in the Midwest,said Alan Seabaugh, professor of electrical engineering at Notre Dame, who will serve as principal investigator for the project.

Notre Dame was one of the first universities to focus strongly on nanoelecronics.

Its Center for Nano Science and Technology, established in 1999, explores the fundamental concepts of nanoscience in order to develop unique engineering applications using nano principles. The center is composed of a multidisciplinary team of researchers from the Departments of Electrical Engineering, Chemical and Biomolecular Engineering, Computer Science and Engineering, Chemistry and Biochemistry, and Physics.

University researchers Wolfgang Porod and Craig S. Lent are co-inventors of Quantum-Dot Cellular Automata (QCA), a transistorless approach which does not rely on flowing electrons to transmit a signal, so no electric current is produced and heat problems are avoided. This approach, along with devices based on quantum-mechanical tunneling, spin and nonequilibrium carrier distributions, comprise the research and development focus of MANA.

The establishment of MANA marks another important milestone in Notre Dames evolution as a pre-eminent research university. Strategic investment in staff and infrastructure facilities, including the new Stinson-Remick Hall, which will allow pioneering work in circuitry, have enabled the University to support complex research efforts like MANA.

MANA also closely ties Notre Dame to the economic development initiatives of the state of Indiana and the city of South Bend. It is anticipated that MANA commercialization activities will occur in the new Innovation Park at Notre Dame. The city of South Bend anticipates that these commercialization activities may also occur in a nanoelectronic development facility it is developing in the former Studebaker corridor area in downtown South Bend.

The city of South Bend also is committing additional millions of dollars over several years to complete preparation of the Studebaker corridor into a future hub of nanoelectronics commercialization and manufacturing in support of new jobs and investment associated with the Midwest Academy of Nanoelectronics and Architectures,Luecke said.Where Studebaker once made wagons and Oliver made chilled plows, were expecting thousands of jobs with dozens of nanoelectronic companies creating technological wonders that have yet to be imagined.

From an economic development perspective, we see this as the most significant venture that the community has had the opportunity to pursue in the last 150 years,said Patrick McMahon, executive director of Project Future, which serves as a catalyst between the St. Joseph County community and prospective businesses.Given that we are talking about a trillion dollar industry, if we can capture the spin off aspects into local jobs and business activity, it could completely transform our local economy for years to come.