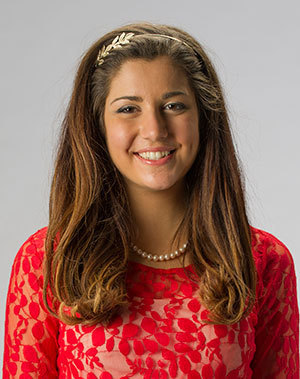 Sganga is the winner of Kristof’s annual “Win A Trip with Nick” contest. Her prize is traveling with the Times’ columnist to a developing country to raise awareness about global poverty. During the trip, she will report for a blog and videos that will be published on The New York Times website. Follow the blog.

“Nicole is a terrific journalist-in-the-making, and I’m impressed by how much she has been able to do on the side from London to Washington while earning top grades at Notre Dame,” Kristof said. “I’m looking for a student who is going to be able to produce compelling blogs and videos to engage other young people around the world, and Nicole will be superb at that. I can’t wait to see her work from the field.”

“Telling meaningful narratives through the reporting medium is a necessary ingredient of the human condition,” Sganga said, adding the opportunity to work alongside New York Times reporter Kristof is truly humbling. “As an individual, listening to powerful stories is my favorite pastime. As a journalist, relaying these messages to others is my mission. I am inspired by his incredible integrity within the nuanced field of international journalism.”

A native of Cold Spring Harbor, N.Y., Sganga is majoring in both film, television and theater and political science, with a minor in the John W. Gallivan Program in Journalism, Ethics and Democracy. She is also a Hesburgh-Yusko Scholar, one of just 25 in the Class of 2015 awarded the highly competitive four-year merit scholarship.

“Nicole exemplifies the qualities of leadership that The Hesburgh-Yusko Scholars Program seeks to inculcate and foster among its students,” said Joseph Buttigieg, The William R. Kenan Jr. Professor of English and director of The Hesburgh-Yusko Scholars Program. “She has a commitment to social justice, a global vision and a determination to be a force for good in their communities, the nation and beyond.”

Sganga has taken advantage of many opportunities to travel and gain real-life experience during her time at Notre Dame. In addition to working as an intern for the news division of the local NBC affiliate, WNDU, she worked in Thailand as an intern with HELP International. Last summer, she served as an intern at the Cannes Film Festival, followed by a two-month internship at the CBS News bureau in London just in time to cover the birth of the next heir to the British crown.

During the fall semester, Sganga participated in the Notre Dame Washington program where she interned with CBS News again, this time working on the program “60 Minutes.” This spring, she is studying abroad in London. The video she submitted for her contest entry features the wide array of reporting experiences she’s had from Thailand and Myanmar, to Norway and Alaska, to last year’s BCS championship game in Miami, where she was the youngest sideline reporter.

“Nicole has made the most of her time at Notre Dame from day one. She constantly looks for opportunities to make a difference, and she will create opportunities if none presents itself,” said Josh Kaplan, director of undergraduate studies for the Department of Political Science. “She not only reported on refuges in Thailand, she raised money to purchase video cameras so that the refugees from Myanmar could create videos themselves to address public health needs such as AIDs prevention.

“She not only has a passion for journalism, she has a vision and understanding of how journalism can make a difference,” Kaplan said. “She grew up in the town of Cold Spring Harbor, N.Y., home to the famous genetics lab, but her educational goals have shifted from medicine itself to using her Arts and Letters education as a foundation from which she can think differently about more effective solutions to social and medical problems.”

Sganga, 20, is also a chief broadcast announcer for WSND, a radio station on the Notre Dame campus; a correspondent for ESPNU; and a former news and sports producer for NDtv, a student-run television station.

Kristof and The New York Times created the annual contest in 2006 to give undergraduate and graduate students at American colleges and universities an opportunity to report and raise awareness about poverty issues and solutions in the developing world. So far he has taken seven students and two teachers on reporting trips.

Sganga was backpacking through Turkey for spring break when she found out she’d won the contest. “I am a storyteller. Every story has a theme, a human condition, a way to connect to the world around it.” Sganga declared in her contest video, “I look forward to traveling alongside Mr. Kristof, and communicating the faces of global poverty and progress to the next generation.”