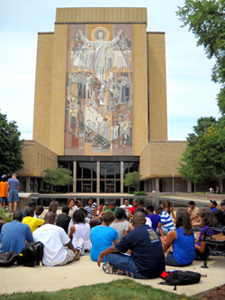 Forty of the nation’s best and brightest rising high school seniors converged on the University of Notre Dame campus recently for a week of intellectual engagement and a glimpse of academic and student life.

Since 2000, Notre Dame’s Seminar for African American Scholars (SAAS) has exposed students to the vibrant intellectual life and Catholic character of the University with the hope that these gifted students ultimately will choose to attend Notre Dame.

This year, SAAS program director Darren Davis, associate vice president for research and professor of political science, designed the week’s curriculum and activities around the theme of Catholic social teaching, presenting race and identity in a broader theoretical context. 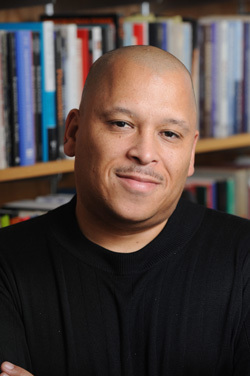 “The new approach to this year’s SAAS program acknowledges that these African American students are essentially no different from most other students at Notre Dame,” says Davis.

“They are very bright, highly motivated and intellectually curious – and they have choices of where they will attend college and are being recruited by some of the best universities in the country.”

In years past, the issue of race was addressed through more overt appeals during SAAS week, an approach that risked stigmatization. While race may be important in African American students’ identity formation and worldview, race is only one identity among many that are important to them.

“In many important ways, these student scholars do not fit the profile of the ‘typical’ African American student, and their worldviews likely are grounded in a different reality,” Davis says.

By focusing on Catholic social teaching, not only was Notre Dame’s unique Catholic character brought to light for these young scholars, but they learned that respect and dignity for everyone – a core tenet of Catholic social teaching – centers the need to alleviate racism, aid the powerless, the oppressed, and the disadvantaged at the heart of the University. 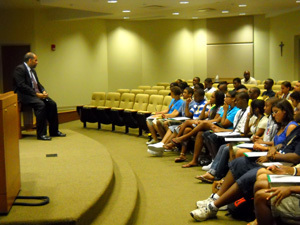 “Through the week’s seminars, taught by a diverse group of faculty who are among the best in their fields, students were able to learn that Catholic social teaching not only demonstrates that racism, sexism and ethnocentrism are wrong on moral grounds, but that at the University of Notre Dame, our faculty and students are actively engaged in efforts to alleviate human suffering around the world,” Davis explains.

In addition to engaging students on an intellectual level, “exposing students to the fabulous resources at Notre Dame was equally important,” Davis says. “The DVT theatre, the Moot Court room in the Law School, classrooms in DeBartolo, the library, Kroc Institute and the Center for Social Concerns convey an intellectual seriousness they will not find at another institution.”

“They add gravitas to the material discussed in the seminars and they provide an insight from a student scholar perspective.”

In preparation for the week’s activities, each student read “God, Country, Notre Dame,” the autobiography of Rev. Theodore M. Hesburgh, C.S.C., in which he chronicles his 35 years as Notre Dame’s president. Adding an additional level of impact, after the book discussion, students were able to talk to Father Hesburgh about his experiences.

“I could not think of a better way to describe and put into context the Notre Dame experience than to read the book and discuss it with Father Hesburgh,” Davis said.

Though the student participants of SAAS were here for just a week in the summer, there will be a yearlong effort to stay engaged with them, including Notre Dame alumni clubs and additional contact at spring visitation time, as well as through Facebook and email to demonstrate the University’s interest in them.
“Participants in the SAAS comprise roughly 20 percent of the incoming African American students,” Davis says. “And those who decide to attend Notre Dame probably would not have considered it were it not for this summer program.”