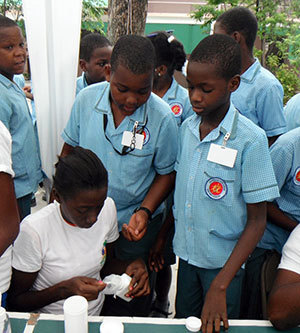 The University of Notre Dame Haiti Program will complete the final mass drug administration (MDA) for this year in Arcahaie, Haiti, from Thursday-Sunday (June 19-22). The program, which aims to eliminate lymphatic filariasis, a mosquito-borne endemic disease, from Haiti by the year 2020, has successfully completed MDA this year in Léogâne, Port-au-Prince and 19 other communes in the Caribbean country.

Recently, the program completed MDA in the Carrefour commune, located at western end of the Port-au-Prince metropolitan area. More than 1,000 students at JUVENAT School, a private school in the region, were among those who received a combination of two drugs designed to treat the parasitic worm that causes lymphatic filariasis. The MDA site at the school was one of almost 500 such sites across the commune, about 20 percent of which were at schools, and each of which was expected to treat about 1,000 individuals during the four-day period. The Haitian Ministry of Health, with support from Notre Dame and its partner, the Centers for Disease Control and Prevention, was responsible for MDA in the Port-au-Prince metropolitan area, as well as the Central Plateau and four other provinces, with close to 50 percent of the Haitian population being potential beneficiaries of the treatments sponsored by Notre Dame benefactors in 2014.

MDA is one of several activities managed by the Notre Dame Haiti Program, founded by Rev. Thomas Streit two decades ago. The program also administers other activities including:

Earl Carter, managing director of the Notre Dame Haiti Program, attributed the program’s success to Father Streit’s unwavering vision and the generosity and compassion of others. “We have been tremendously blessed these past years; corporations and foundations have stepped up, starting with the Bill & Melinda Gates Foundation in 1999 and continuing with many others, who hand-in-hand with the extremely generous Notre Dame family have had a heart for helping the people of Haiti meet a significant problem head-on. By God’s grace, and through the sustained generosity of our partners and friends, we will be able to continue to partner in the fight to eliminate lymphatic filariasis, and meet the needs of those affected by the disease,” said Carter.

This year’s MDA efforts, overseen by the Notre Dame Haiti Program, are made possible by the generous support of the Abbvie Foundation, the Centers for Disease Control and Prevention, Inter-American Development Bank, an anonymous philanthropic organization and the gifts of many other friends of the Notre Dame family.