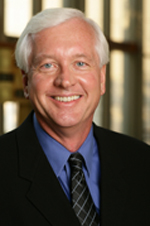 The purpose of a free trade agreement is straightforward: to remove or reduce tariffs, quotas and other non-tariff barriers on goods and services traded between two or more countries. The goal is to enhance the trade among countries in a wider variety of goods and services and where each country has a comparative advantage producing. The United States currently has agreements in place with 17 countries.

Finance Professor Jeffrey H. Bergstrand of the Mendoza College of Business at the University of Notre Dame recently was honored for his research paper that sought to answer that question.

“Do free trade agreements actually increase members’ international trade?” co-authored with Scott L. Baier of Clemson University, was recognized as one of the “Top 20 Most-Cited Articles” published in the Journal of International Economics 2005-2009.

Global publisher Elsevier compiles the list of most cited articles and bestows the award. The Amsterdam-based company publishes approximately 2,000 journals and 20,000 books and major reference works.

In the paper, Bergstrand and Baier stated that despite 40 years of analysis of the effect of free trade agreements on trade flows, there has not been a clear answer to the question of whether they work to increase international trade. The authors said this was because the model commonly used to measure the effect – the gravity model of international trade – has a significant drawback. While the model can account for important factors influencing trade flows – such as countries’ economic sizes and the distance between them – the measurement of the influence of free-trade agreements on trade flows typically had been compromised by the fact that countries self-select into these agreements.

The stability of such estimates across many alternative data sets now provides policymakers with a potential method for assessing with more confidence the ex post effect of free-trade agreements. This methodology is now being pursued, for instance, by the European Commission in evaluating the effectiveness of European Union (EU) agreements with non-EU countries.

The paper originally was published in the March 2007 issue of the Journal of International Economics (Volume 71, number 1). The research underlying this paper was supported financially by the National Science Foundation.

Bergstrand has been a finance professor in the Mendoza College of Business for more than 20 years, as well as a fellow of Notre Dame’s Kellogg Institute for International Studies, and a research associate of CESifo, an international network of researchers based in Europe. His research on international trade flows, free trade agreements, foreign direct investment, multinational firms and exchange rates has been published in more than 50 articles in such journals as the American Economic Review and as chapters in books.

Bergstrand’s current research focuses on economic determinants of multinational firm behavior and foreign direct investment, and the growth of regionalism. He also is advising the European Commission on the effects of free-trade agreements on trade flows.