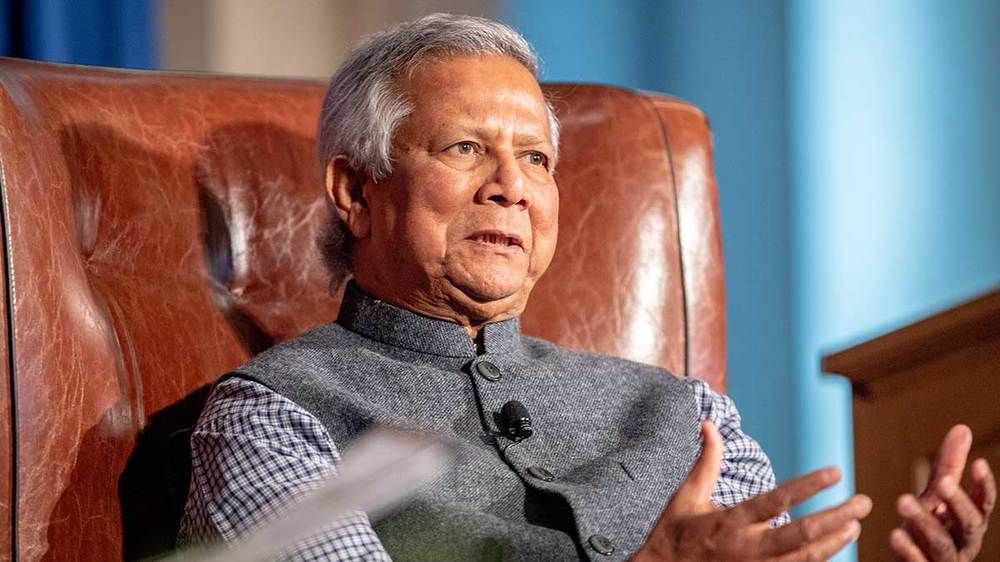 Speaking to an audience of about 650 Thursday night (April 12) at the University of Notre Dame, Muhammad Yunus explained why he has devoted his life’s work to social entrepreneurship.

“I wanted to make myself useful to people,” he said.

In the 1970s and early ’80s, Yunus created the Grameen Bank in his native Bangladesh and pioneered the concept of microcredit (or microfinance) — the extension of loans to people who lack collateral, are jobless or who have no credit history to support entrepreneurial initiatives and, ultimately, reduce poverty.

The success of his work has led to numerous accolades, not the least of which are the Nobel Peace Prize, Presidential Medal of Freedom and Congressional Gold Medal.

As the spring semester keynote speaker for the Notre Dame Forum, Yunus explained to the audience in the Dahnke Ballroom of the Duncan Student Center that he was troubled by the ways in which loan sharks victimized the poor and was moved to “protect” them.

In conversation with Ray Offenheiser, director of the Notre Dame Initiative for Global Development in the Keough School of Global Affairs, Yunus said he began by lending money “out of my own pocket,” and then eventually partnered with the government and banks to make small loans available to the poor, and mainly to women. His work evolved into Grameen Bank, which today has some 2,600 branches and nine million borrowers in 97 percent of the villages in Bangladesh.

The Grameen model has been copied in dozens of other countries, and Grameen America can be found in 11 U.S. cities.

“Everything we do with Grameen,” Yunus said, “is the reverse of a conventional bank. They go to the rich, we lend to the poor.”

In fact, the very name of the bank is the opposite of the typical bank, which generally is headquartered in a major city. Grameen means “village,” and bank branches in Bangladesh are all located in villages.

Yunus thought from the start that bankers’ belief that loans to poor people would result in high default rates was an inaccurate preconception. He thought the poor could be lent money without collateral, use their loans to start and maintain businesses and then repay them.

He has been proved right.

Grameen reports a repayment rate of more than 99 percent.

Despite the success, there are critics of the microcredit model.

Prior to his conversation with Offenheiser, Yunus received the Ford Family Notre Dame Award for International Development and Solidarity from the Kellogg Institute for International Studies. The award recognizes substantial contributions to human development through research, practice, public service and philanthropy.

“Professor Yunus is teaching us that there is a new way of doing business,” Father Jenkins said.

Father Dowd added that Yunus’ work proves that “economic development need not come at the expense of human dignity.”

Titled “Going Global,” this year’s Notre Dame Forum has explored the challenges and opportunities of globalization. Since its establishment in 2005, the Notre Dame Forum has featured major talks by leading authorities on complex issues, including the role of the presidential debates in our political process, immigration, sustainability, global health, the global marketplace, K-12 education, women in leadership and the place of faith in a pluralistic society.