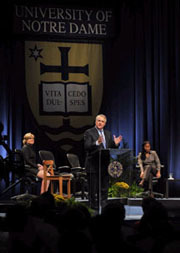 In his World Day of Peace message last January, Pope Benedict XVI touched on many topics of pressing concern, including sustainable energy – that is, the use of energy resources that meet the needs of today without compromising those of tomorrow.

One area where there is a particular need to intensify dialogue between nations is that of the stewardship of the Earths energy resources,the pope said.The technologically advanced countries are facing two pressing needs in this regard: on the one hand, to reassess the high levels of consumption due to the present model of development, and on the other hand to invest sufficient resources in the search for alternative sources of energy and for greater energy efficiency.

Taking the pontiffs lead, the University of Notre Dame focused on the many issues related to sustainable energy during its fourth annual Notre Dame Forum in the Joyce Center arena Wednesday (Sept. 24).

To open the forum, Notre Dames president, Rev. John I. Jenkins, C.S.C., offered a succinct rationale for selecting this years topic: We simply do not have the option to defer the search for a sustainable energy solution for long. Or, more accurately, for you members of the classes of 2009, 2010, 2011 and 2012, that option will be taken away in your lifetimes. We must take action and make hard choices that will serve the common good, rich and poor, around the world.

Thompson began the two-hour event by telling of her experiences covering environmental issues around the world.

The rest of the world is hungry for our country to get involved in this issue, and to lead,she told the Joyce Center crowd of some 3,500.There are solutions out there and it is a possible thing to achieve, to have energy-renewable resources.

Thompson also introduced a short video that summarized the technological, environmental, economic, political and social justice issues at the heart of the issue.

Ritter, who since his election in 2006 has quickly established Colorado as a national and international leader on energy issues, noted that he is the father of four children ages 22 to 15.

I am absolutely convinced that they will consume energy in an entirely different way than I have in my lifetime. They have to,he said.

Rittersnew energy economyin Colorado is theway we as a country must think,he said.Not just Colorado, not just states with renewable resources, but the entire country. We must act differently to achieve the five es: energy security, environmental security, economic security, education and equity.

He added thatif we do nothing, there is an impact on the poor around the world.

The impact on the poor is a large part of Carters focus. She founded Sustainable South Bronx in 2001 after writing a $1.25 million federal transportation grant to design the South Bronx Greenway.

Environmental justice for all is a civil right in the 21st century,she said.People are aching for leaders to inspire them that there is another way. The current crisis we find ourselves in today has been felt in the ghettos of our country for decades.

It would be wonderful to think: What if we actually located all those noxious facilities in wealthy facilities as quickly as we did in poor ones? We would have had a clean green economy a long time ago.

She added:I want to help municipalities around the country and around the world unlock their own green potential. There is a national need for this.

Immelt, the ninth chairman of GE, has led the companys Ecomagination initiative, a commitment to find new energy solutions and to reduce its own environmental footprint.

I have no emotional ties to the environment and sustainability; the closest I have come is golfing,he said.I would urge you to think about this in terms of whats in your heart, but also whats in your head. If you study whats going on, youre going to come to the conclusion that this is extremely important. Theres no crime in making money to solve some of societys toughest problems. Thats what GE has done for more than 130 years.

He added:This is imminently solvable … If we can take all the things this country is good at, this is a solvable problem.

Moniz, a professor of physics at MIT, served as undersecretary of the U.S. Department of Energy from 1997 to 2001 and from 1995 to 1997 as associate director for science in the Office of Science and Technology Policy in the Executive Office of the President.

If we are going to move forward in this pathway, we need to find the synergies of bringing together environmental and security concerns,he said.

He added:One of the things we have not yet learned to do broadly enough is match the start-up culturewith the incumbents – oil companies who want to become energy companies. Distributional and organizational issues need to be addressed if were going to come together on a time scale that matters. Its inconsistent to talk about free market and energy independence as long as we are oil dependent.

The panelists were joined for the second half of the forum by three other experts who offered observations: Sister Anne Veronica Horner Hoe, C.S.C., a Sisters of the Holy Cross educator who, as principal of a 3,000-student K-12 school in Brazil, has had many years of experience developing alternative sustainability energy projects with teams of educators, applying academic learning to real social problems; Frank Incropera, the H. Clifford and Evelyn A. Brosey Professor in Engineering at Notre Dame who studies heat and mass transfer with applications to materials processing, electronic cooling and energy conversion; and Lourdes Long, a Notre Dame senior anthropology major and president and founding member of GreeND, the energy and environmental issues student group.

In addition to the forum, Notre Dame also is sponsoring throughout the academic year a wide array of events, lectures, film series and other activities related to sustainable energy. Among them is the Dorm Energy Competition, a project starting Thursday that will provide a cash prize to the residence hall that saves the most electricity.

The University also has launched several new initiatives to seek sustainable solutions and to become more institutionally energy efficient. These include:

Notre Dames response to calls for sustainability led to a significant rise in the Universitys standing in annual ratings published by the Sustainable Endowments Institute (SEI). In a report issued today, Notre Dame registered the largest two-year gain of the more than 200 colleges and universities in the study – from a D- in 2007 to a B- in this year.

The Notre Dame Forum assembles world leaders on campus in discussion of the leading issues of the day.The forum seeks to engage all campus constituents in important conversations to better formulate solutions and effect positive change.

More information, including a link to view this years sustainable energy forum online, is at http://enlighten.nd.edu/ .