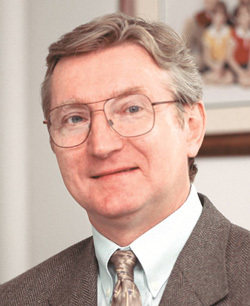 University of Notre Dame professor Wolfgang Porod has been invited to serve on the committee conducting a comprehensive strategic review of the U.S. government’s National Nanotechnology Initiative (NNI).

The NNI encompasses the nanotechnology-related activities of 25 Federal agencies and coordinates a portfolio of basic and applied research activities focused on advancing the economic and national security interests of the United States. The 2012 federal budget provides $2.1 billion for the NNI, and cumulative investment in the NNI since 2001 totals over $16.5 billion.

This second triennial review of the NNI, mandated by the 21st Century Nanotechnology Research and Development Act, will be conducted through the National Academies and submitted to the White House’s National Science and Technology Council.

The reviewers’ tasks include examining the role of the NNI in transferring technologies to the private sector, assessing how the NNI measures progress toward its goals, and analyzing NNI’s management and coordination of nanotechnology research across both civilian and military federal agencies.

Porod, the Frank M. Freimann Professor of Electrical Engineering at Notre Dame and director of the University’s Center for Nano Science and Technology (NDnano), brings valuable expertise and experience—particulary in nanoelectronics, materials science and engineering, and research management—to the review team.

He is the co-inventor of the “quantum-dot cellular automata” concept, which is a new way of representing information by electronic charge configurations at the molecular level, and is a pioneer in “nanomagnet logic,” one of the emerging device technologies being pursued by the Semiconductor Research Corporation’s Nanoelectronics Research Initiative.

As the director of NDnano, Porod oversees research programs in such areas as nanomaterials, new energy harvesting technologies, and the interface between biological systems and nano-scale structures.

The Triennial Review Phase II committee is comprised of a range of academic and corporate leaders and is expected to deliver its report by February 2013.

On the front lines of the coronavirus fight, health professionals show ‘compassion to its fullest’